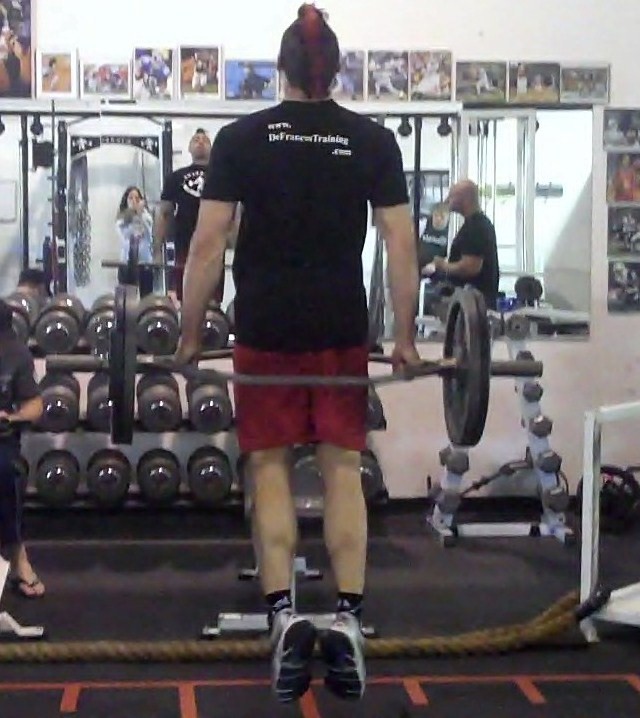 Q: Hey Joe D I really enjoyed your recent blog post about developing knockout power! The weighted jumping exercises definitely make sense..i’m looking forward to incorporating some of your suggestions into my workouts!! My question is where do hang cleans and power cleans fit into the mix? I’m assuming your rationale behind the weighted jumps is the explosive hip extension(triple extension) involved, correct?? Well aren’t cleans the ultimate hip extension power movement? I know you train tons of football players so surely you incorporate them somewhere in your training programs? Any input would be golden coach..THANKS!

I’ve discussed my stance regarding hang cleans and power cleans many times before on this website. Simply put, I don’t feel they are necessary for any class of athlete (with the exception of Olympic weightlifters).

I don’t want to bore my readers by re-writing what’s already been written, so I suggest you check out the following links:

Can you get “explosive” without doing power cleans?

If you search my website, you’ll will find even more posts regarding this topic.

Since many years have past since some of these posts were written, I’ve decided to provide my readers with a new perspective on this age-old topic. Instead of simply listing the “why’s” of why I don’t have my athletes perform cleans; I thought that providing some videos would paint a clearer picture.

Let’s remember that every coach that advocates hang cleans or power cleans does so because of the “triple extension” involved with these movements. The problem is, you will be hard-pressed to ever find an athlete (besides an Olympic weightlifter) getting a “triple extension” benefit! I did my best to find a good video representation of someone who performs cleans like the majority of athletes out there. (I wanted to find a non Olympic-weightlifting athlete performing the lift. I did not go out of my way to find a really “bad” video, either.) The below video shows what most high school and college athletes look like when they perform cleans. (NOTE: I don’t know the person in this video; and I’m not trying to offend him in any way. The sole purpose of this video is to help people ‘see’ my point.)

One of the reasons I feel coaches believe that cleans are making their athletes “explosive” is because they focus their attention on the barbell, instead of focussing on the athlete during the lift! The barbell bounces around and the weights make loud noises, so everyone thinks something “explosive” is happening! Unfortunately, the only things usually “exploding” are the athlete’s lumbar spine, patella tendons and the tendons and ligaments that support their wrists!

If you’re like me, you probably didn’t see any “explosive” hip, knee or ankle extension! Unfortunately, the technique utilized in the above video represents about 98% of what I’ve seen in my 13+ years in this profession.

The final “clincher” for me this past year was when THREE separate Division 1 college football players entered my program with surgically-repaired wrists due to the “catch” phase of this exercise! All three of these athletes were forced to do hang cleans during their college careers and now their training will be negatively effected forever. FYI, two of the three athletes are now in the NFL and have to deal with an injury that was 100% preventable if their coaches would have provided them with safer, more logical, exercise choices! Speaking of which…

Check out three examples of some of our favorite weighted jump variations. Again, I suggest watching each video 3x. Check out the hips, knees and ankles of each athlete while viewing the videos. Notice the increased range of motion and much more “explosive” extension (compared to the hang clean) at each of the three joints discussed.

This first video shows a bunch of highlights from a workout performed by UFC fighter, Dan Hardy, training at our gym last week. But I’ve posted it specifically for everyone to check out the first exercise shown – Trap Bar Jumps.

The beauty of these three exercises, as well as all of the weighted jump variations we have our athletes perform, is that you can’t perform them without ‘triple extension’! All of these exercises are basically fool-proof! I’m also proud to say that I’ve never seen an athlete get injured while performing any of our favorite jump variations. I’ve sure as hell never seen torn wrist ligaments or a ruptured disk; two injuries that are all too common during the “catch” phase of hang cleans and power cleans. I’ll take an occasional scraped shin every now and then while box jumping any day of the week!

To conclude; I am in no way “bashing” hang cleans or any of the Olympic lifts. As I’ve stated time and time again, there are no “bad” exercises, just bad technique! I’m sure many athletes enjoy performing hang cleans and have benefitted from them. If you like doing them, go right ahead; it sure as hell doesn’t matter to me! But, in my profession, I have to look at the risk:reward ratio of every exercise I prescribe. My job depends on it. There’s just too much money at stake for many of my athletes to risk their health in an environment that’s supposed to help prevent injury! Their sports are dangerous enough; I sure as hell don’t need them getting injured in my weightroom!

And I can tell you – without question – weighted jump variations will make you just as “explosive”, if not more, than any Olympic lift variation…without the risk! To me, it’s a no-brainer!