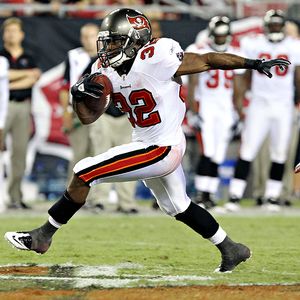 After suffering from knee & groin injuries last season, Kareem Huggins has come to DeFranco’s to get healthy, strong(er) and transform his body for next season!

Kareem was a record-setting running back at Hofstra University before signing with the Tampa Bay Buccaneers. While with the Bucs, Kareem earned a spot on the 53-man roster, moved his way up the depth chart and even shared time as the starting running back. Unfortunately, Kareem injured his knee and after a few surgeries, he was released. But then he found us 🙂

I figured I’d feature Kareem in this “Behind the Scenes” post, just in case there are any NFL coaches/scouts that have any doubt regarding the strength/health of his knee. This kid will be playing on Sunday’s again very soon…

*This exercise is featured in our soon-to-be-released EXTREME DVD.

Got questions regarding this specific workout? Shoot me a comment below and I’ll be checking back throughout the week.

By the way, I am honored and humbled to announce that I was mentioned/featured in a Forbes Magazine article. Click here to check it out >>> Forbes Magazine