Skip to content
Anyone who follows my website probably remembers Dhani Jones as the first NFL player I ever wrote about. After all, Dhani was the first NFL football player who ever hired me!! Over the past couple of weeks, Dhani has become somewhat of a household name (even to non football fans) due to the success of his new reality show, “Dhani Tackles the Globe”. 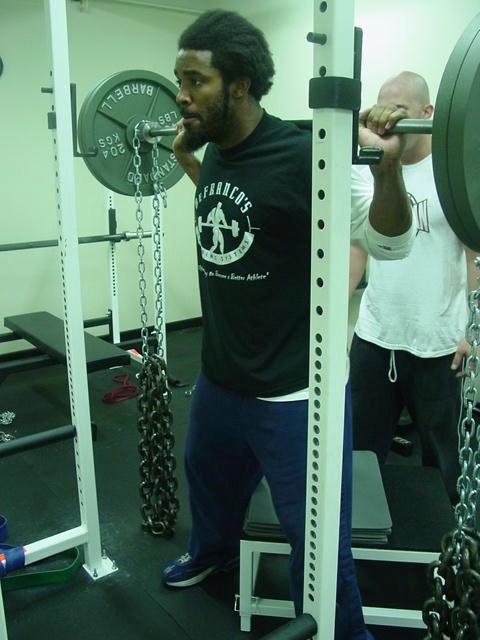 Long before Dhani tackled the globe, he was hitting the weights in the original DeFranco’s facility, aka, ‘the storage closet’!

The premise of Dhani’s show is simple; he travels to different countries, studies their national sport, and then competes in that sport after only one week of preparation. Obviously, there is only so much Dhani can learn (from a technical standpoint) about each foreign sport in such a short amount of time. But, if you’ve seen the first two episodes, you know that Dhani did an incredible job of holding his own in both sports! (So far he has traveled to Thailand and competed in Muay Thai and Switzerland to compete in the Swiss version of wrestling called Schwingen.)

In both episodes there was a common theme; when asked about Dhani’s ability to pick up each sport, the “locals” from both Thailand and Switzerland have commented about Dhani’s strength. This past week’s episode showed Dhani in Switzerland competing in the sport, ‘Schwingen’. During his first practice session, Dhani held his own even though he never participated in that sport in his life. When asked how Dhani was doing, one of Dhani’s Swiss training partners said, “He is very strong.”
Dhani shows off his “universal” strength…

O.K., you’re probably wondering what the hell the point is of this blog post, aren’t you? My point is, although there are many qualities an athlete must posses, strength truly does build the foundation for almost every sport! Literally every athlete, from every sport, from every country, knows and respects strength. Using Dhani as an example; if he was a skinny, weak, “athletic” type of guy; he would have gotten his ass kicked in both Muay Thai and Schwingen! His strength undoubtedly made up for his lack of technical skill and experience the past two weeks and you will see how it continues to help him throughout the season. No other single athletic quality carries over to so many different sports! 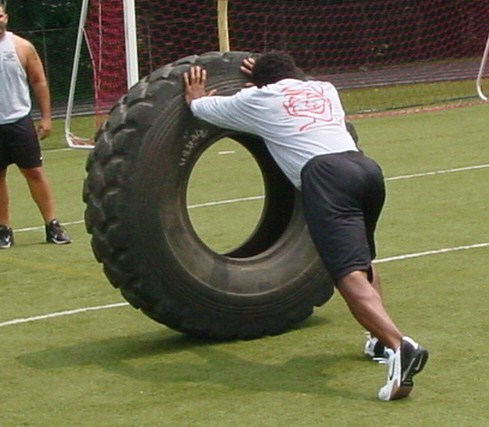 Please don’t think I’m trying to say that strength is the “be-all, end-all” of every sport. If you want to truly be the best, there are many aspects of training that must be addressed – technical training, specific energy system training, etc., etc. But, when an athlete is strong (in relation to his bodyweight), every other aspect of training will come easier! Remember that your muscles are what create movement in your body! Stronger, more powerful muscles will help you run faster, jump higher, change direction quicker, punch & kick harder, etc., etc.This is why I feel that a proper strength training program should be the foundation for all athletes – especially early in their careers when their athletic “foundation” is being built. As the old saying goes, ‘The bigger the foundation; the higher the peak’!

Simply put, when it comes to athletics, strength truly is the “Universal Language”!

To learn how we build “Super Strength” in our athletes, check out this DVD!!

And don’t forget to check out “Dhani Tackles the Globe” every Monday at 9:00pm EST on the Travel Channel!