Since Friday night, I’ve kept my mouth shut for one reason and one reason only – because Brian Cushing asked me to…and whenever family asks me to do something, I do it! And yes, I consider Cush my “little” brother from another mother…

Friday night I was eating dinner with my girlfriend and 2-year-old niece at a Jersey Diner when I see Brian Cushing’s name appear on ESPN’s ticker for violating the NFL’s steroid policy. I was shocked! But, my first reaction was NOT, “Damn Cush, what the hell were you thinking?!” I immediately looked at my girlfriend and said, “There is NO FU#KING WAY Cush failed a steroid test! This is DEFINITELY a mistake…I gotta call him ASAP!” The reason I KNEW Cush didn’t fail a steroid test is because I know Brian Cushing, the person. And I know FOR A FACT that he does NOT take anabolic steroids (even though I just saw it on ESPN). In fact, in all my years of training Cush, we’ve never even talked about steroids! So, unlike many of Cush’s “friends” and “fans” who immediately threw him under the bus (I’m talking to you, Jay Glazer); I called Cush to get HIS story and show my support!

Once I got Cush on the phone, he tells me he’s shocked at what’s happening, but assures me he didn’t fail for steroids. I believe him. Sure enough, the next day the term “steroids” has been replaced with “PED”…BIG DIFFERENCE. Yet, ESPN never issued any official retraction statement. Apparently, they don’t think there’s any difference between anabolic steroids and a category that’s so big (and vague), it includes friggin’ cough medicine!?!?

There is a LOT I want to say regarding the specifics of this story, but I’m not at liberty to speak about it because it’s being handled by Cush’s agent and attorney. So for now, I’m just going to address the topics that have been directed specifically towards me and my gym…

Now you know that I called him the second I got the news…and I never doubted him. I called him to support him and get his side of the story.

The only reason I haven’t said anything before this was because Cush asked me to “keep quiet” because his agent and attorney are handling the situation and he’s very confident the facts will be revealed soon!

Here’s a link to an article that appeared in New Jersey’s most popular newspaper yesterday. Notice the title of the article, “Brian Cushing’s Trainer Stands Behind Him“. You may be interested in checking out the 12th paragraph where I say, “I’ll goto my death and say Brian Cushing doesn’t take steroids.” Doesn’t really sound like I “turned my back” on him, does it??

And finally, guess where Cush was this morning?? At my gym for two hours. We talked for an hour and he trained his ass off for an hour (as usual). And when my 12:00 crew rolled in guess what happened?? They were all pumped to see him and welcomed him back with open arms. No talk of this “situation”…wanna know why? Because no words need to be spoken when you’re family. The guys at the gym know Brian Cushing, the person. They know he doesn’t take steroids. They know his work ethic, insane disciple and his obsession with living a healthy lifestyle. No explanations needed…business as usual.

Oh, by the way, notice all the pictures of Cush are still on this website…nope, never took ’em down…never even crossed my mind!

This is something I feel VERY STRONGLY about and it’s why I’m seriously considering taking legal action. (And you guys know who you are. If not, I’ll give you a hint…you BEGGED Cush to train with you, but he knew better…and you thought opening a gym ‘just like mine’ would be easy, but now you know better…ooops, did I give away too much??)

Every single person who knows me, knows my stance on anabolic steroids and drugs. I HAVE NEVER TAKEN, RECOMMENDED, SOLD, OR EVEN HELD IN MY HAND AN ANABOLIC STEROID OR ILLEGAL DRUG…EVER! This stance on steroids and drugs was instilled in me at a very young age by my father and it will stay with me until the day I die. This is the exact reason I opened up the type of gym I have – a “hardcore”, “no frills” facility where we pride ourselves on out-working the competition! Saying that I “take” and “recommend” steroids at my gym is a completely slanderous statement that WILL get you in big legal trouble. Test me.

To the “outsiders” that have said, “The DeFranco Brand” is ruined…

This one actually made me laugh, but I’ll address it anyway. I use the word “outsiders” because the only type of people that would make this statement are people that have NO CLUE what goes on inside the four walls of my gym! My gym is a family. And our family knows Brian Cushing, the person. Instead of my “brand” being ruined, it’s actually quite the contrary. Today, while all of our haters were on the computer talking shit about us, we were having the busiest day of 2010 in the gym. (That’s why I’m writing this at 1:00am, as opposed to a ‘normal’ hour.) Fifty-eight athletes walked through the doors of DeFranco’s Gym today. Athletes ranged from 6th graders to NFL All-Pro’s. And guess what…ALL 58 athletes AND parents support Brian Cushing 100%…because they know Brian Cushing, the person. They also know the type of person I am, as well as every other staff member at my gym. THOSE are the people we care about (the “insiders”)…not the internet trolls, not the people who hate Brian Cushing because he’s a better football player than they ever were; and we sure as hell don’t care about any other “outsiders” who spend their days trying to knock other people down because they aren’t happy with their own lives!

To conclude, I look forward to when Cush can speak out about this situation because it’s being blown way out of proportion by the media. And I sure as hell hope the NFL doesn’t strip him of his DEFENSIVE ROOKIE OF THE YEAR & ALL-PRO Awards. Cush’s “suspicious” test was in September…then he was re-tested numerous times throughout the entire season without ever failing. He EARNED those awards and DESERVES to keep them!

For now, I guess I can take comfort in knowing that he’s learned early in his career who his true friends and fans are…and what true LOYALTY is all about. 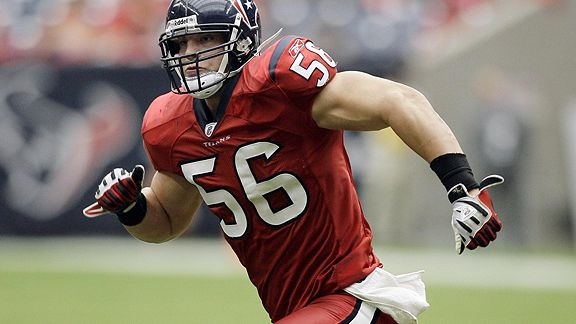 We got your back, Cush!