Q: Joe,
I’m a high school and future college football player. Over the past two years I’ve pulled both of my hamstrings a couple of times. They’re all healed except one of them kind of lingers. I’ve done PT and other kinds of stretches and exercises that I have found but it doesn’t seem to go away for some reason. The hammy that I’m having trouble with was injured about two months ago and I don’t want to have this going into college… I was hoping that you might have some additional tips or video recommendations that might help me. Any help would be greatly appreciated.

If you want to build indestructible hamstrings, there’s only one thing you gotta do!! Check out the video below and all your problems will be solved…

Hopefully you sense my sarcasm!!!

Unfortunately, the fact of the matter is most high school kids’ idea of hamstring training is to perform a couple sets of hamstring curls at the end of their workout. This is why hamstring pulls are such an epidemic; athletes do not properly prepare their hammy’s for the demands of the athletic field! The bottom line is – if you’re a serious athlete that’s after health & performance – don’t model your training after the above video — and NEVER take training advice from a man whose neck and upper arms are the same size as his wrists!

OK, enough ball-busting…help is on the way. Here is my Fantastic Five list of extremely simple – yet valuable – tips for developing indestructible hamstrings! I have utilized these five tips for over a decade with my athletes with incredible success.

The suggestions listed below are guaranteed to make you feel like you’ve got a brand new pair of hamstrings! Incorporate them into your training ASAP!!! 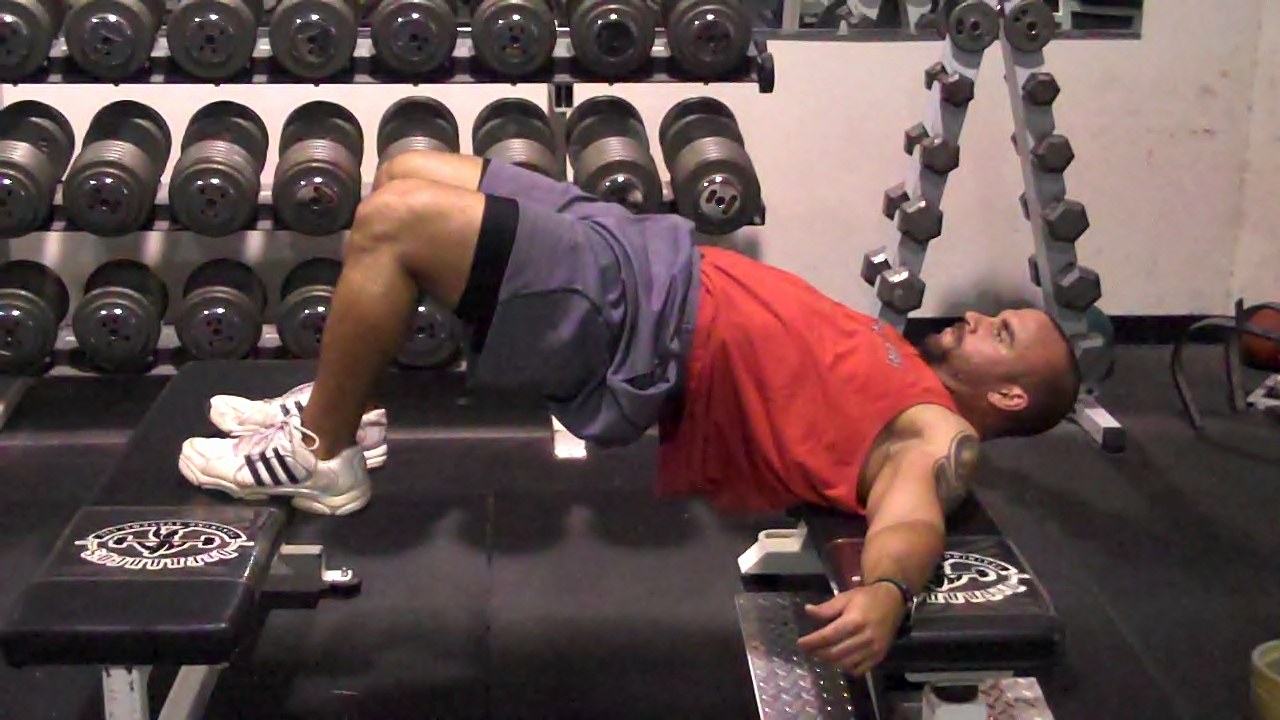 I never figured out why knee flexion exercises are more popular – especially with athletes – when training the hamstrings?? After all, at what point is knee flexion a prime movement in any sporting activity??? Think about it; sprinting, jumping, throwing, tackling, etc., all involve extension at the hip! Bending your knee so your heel touches your ass isn’t required for too many sports. Hopefully you get my point. The bottom line is that your hamstring training should revolve around hip extension movments. Period.

Staples in our program include box squats, deadlifts, reverse hyperextensions, hyperextensions, pull-throughs, band good-mornings, dumbell & kettlebell swings, supine hip thrusts, single leg dumbell deadlifts, etc. I can go on and on, but my point is to show everyone that that are tons of hamstring exercises besides leg curls! 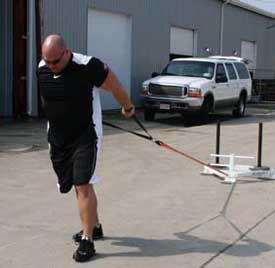 And if you do ever injure your hamstring, this should be the first exercise you do to strengthen it once you start the rehab process! I have had athlete’s come to me with pulled hamstrings and this is the first exercise I usually prescribe. It has gotten many athletes back on the field way before their doctors thought it would be possible! Do them year-round and you probably won’t have to use them as a “rehab” exercise.

Focus on lengthening the “surrounding” muscles! 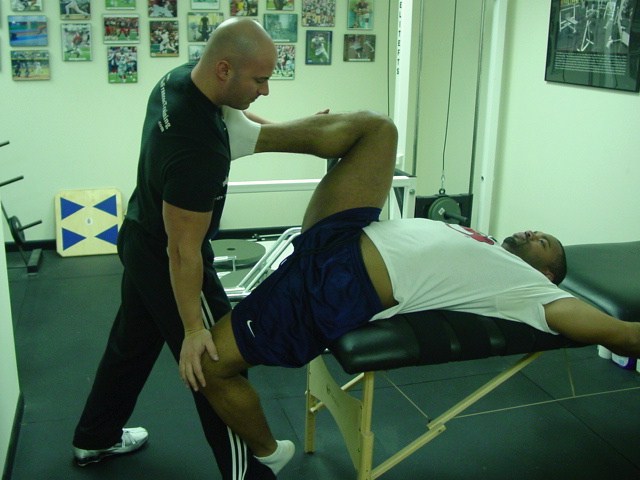 Everyone stretches their hamstrings, yet the hamstrings are the most commonly pulled muscle group!? So, logic would tell us that this isn’t the way to go. In my humble opinion, athletes should focus more on lengthening their hip flexors and glutes, instead of spending so much time directly stretching their hamstrings. Once you start focusing on these very important “surrounding muscles”, you will have much less hamstring tightness and pulls (as well as low back pain). Trust me on this one!

Tight hip flexors create constant tension and “pull” on your hamstrings due to the anterior pelvic tilt that’s created when this muscle group is tight. Whenever I see an athlete walking around with their ass out and a huge arch in their lower back (anterior pelvic tilt / hyperlordosis), I see an athlete that’s prone to a hamstring pull! These athletes need to make hip flexor and glute/hip rotator stretching (and soft tissue work) a priority in their training ASAP! 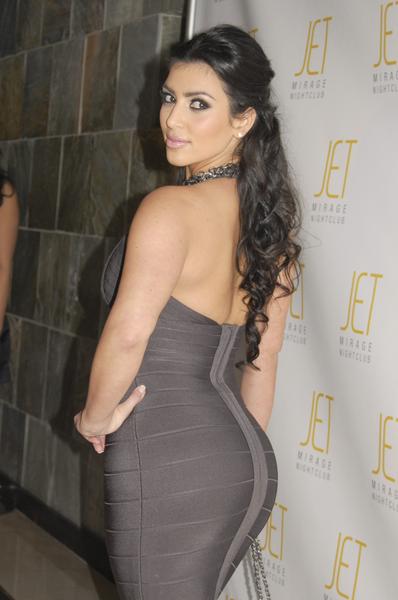 While I’m on the topic of “surrounding muscles”; if an athlete does pull his/her hamstring, the worst thing to do is stretch the hamstring!! (Why the hell do so many people do this?? Think about it; “pulling” a muscle means you over-stretched it…so why on earth would you re-stretch it once the fibers start to heal?) Anyway, for the first couple days (or weeks), it’s a better idea to stretch the hip flexors and surrounding muscles. Stretching the surrounding muscles will help alleviate the tension and constant “pull” that is placed on your hamstrings due to an anterior pelvic tilt.

If you can’t perform the exercise like ‘The Asshole’ in the video above, just lower yourself as slowly as possible, then push yourself back up. (This is actually the more common way this exercise is performed…there aren’t many athletes that can perform the concentric portion of this exercise like it’s demonstrated in the above video.) I feel the eccentric portion of this exercise is actually the more “important” portion anyway; this is because it strengthens the hell out of your hamstrings while they’re lengthening. This is great for preventing hamstring pulls that occur during the foot strike when an athlete is sprinting. This exercise is also an all-star in its ability to improve your sprinting speed! 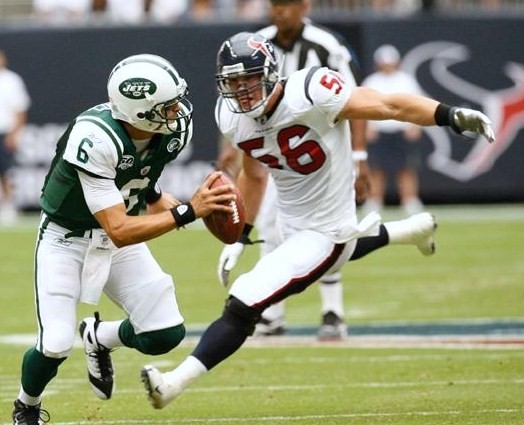 You’re hamstrings take enough of a beating on the field…
don’t beat them up in the weightroom during the season as well!

I’ve never liked the idea of perform leg curls, glute-ham raises, or any knee flexion exercise for that matter, during the competitive season. I know many strength coaches will disagree with me on this; but the fact of the matter is I’ve had tremendous success for over a decade following this rule. Besides my personal experiences, I’ve also had the good fortune of meeting and speaking with thousands of high-level athletes that don’t train at my facility. Whenever I meet athletes that have pulled their hamstrings, I always inquire about their training. Granted, I realize there are many other factors (warm-up, hydration, nutrition, etc.) involved, but the one trend I’ve noticed the most is that athletes that perform a lot of leg curls seem to pull their hammy’s the most. My conversation with these athletes usually goes like this:

Me: “Before you pulled your hamstring, were you incorporating leg curls into your program?”

Athlete with pulled hammy: “Yeah! That’s the thing, yo…my hamstrings are strong as hell. I make sure to do leg curls every time I train lower body! I can do the whole stack on the leg curl machine yo…that’s why I can’t believe this happened and shit!”

Timing is everything when it comes to knee flexion exercises. In my opinion – if you’re going to do them – save them for the off-season. I just feel like they have a tendency to “tighten” your hamstrings and increase your chances for a pull when coupled with the demands of your sport.

One final award for Cush to conquer!!! 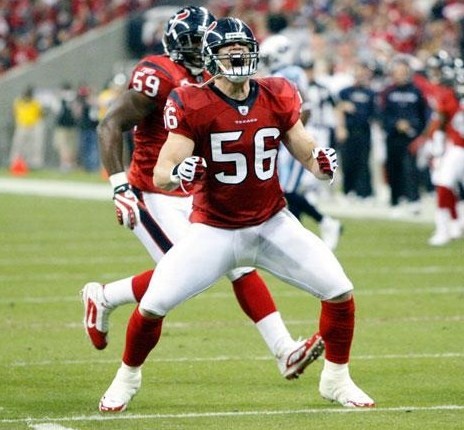 Brian called me today from L.A. and personally asked me to post a “thank you” to our website readers for your support of him throughout the season. You guys obviously supported him with regards to the Defensive Rookie of the Year & Pro Bowl voting…both Brian and I appreciate your time and support!

So – one last time – I’m going to ask you guys to help one of the hardest-working, blue-collar athletes in the NFL, get what he deserves! It will literally take 5 seconds…just click on the picture below and then vote for Cush one last time!

Thanks again for the help!