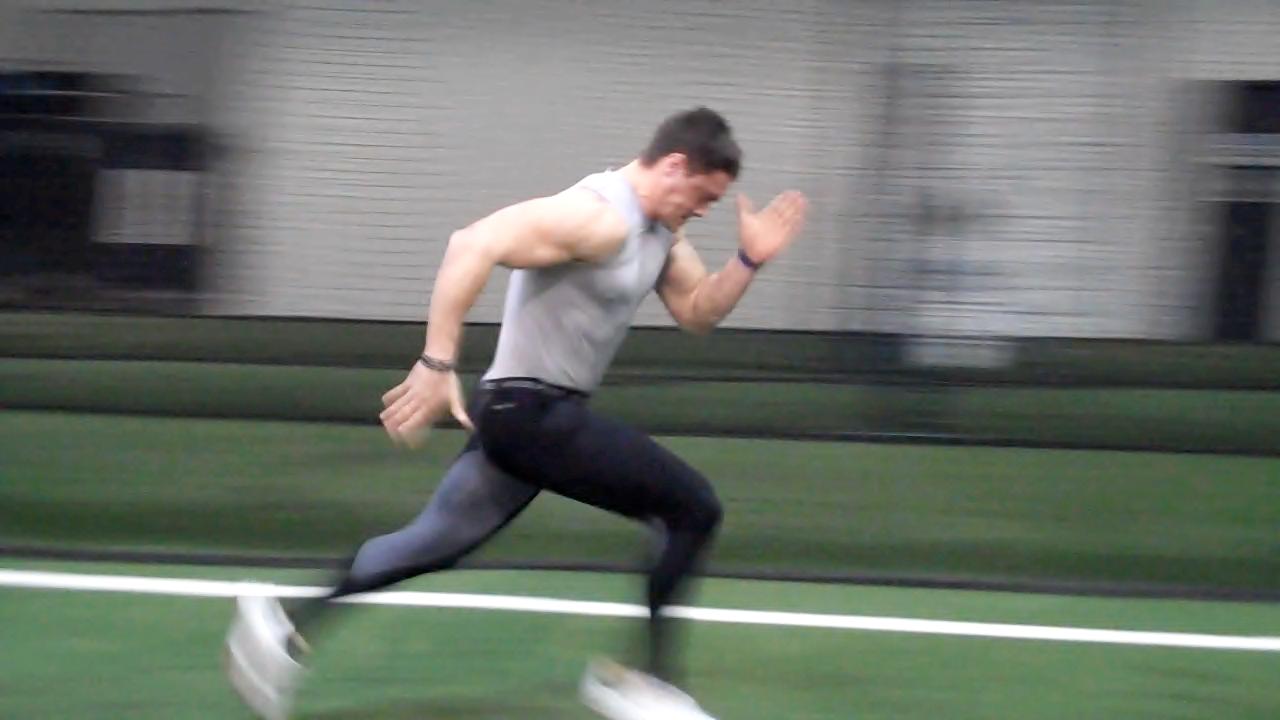 I recently went to a track & field clinic put on by “THE” (what a joke) Ohio State University… The sprinters coach told me Football coaches think they know everything and that they were wrong about larger, more powerful strides as opposed to increased stride turnover (when coaching acceleration). I agree with YOU as opposed to him but he did make a good argument… his reasoning was, when you take larger strides, your feet are in the air longer, and in turn you cant accelerate as quickly. On the other hand, when you have a higher turnover rate, you have more ground contact in order to accelerate. What are your thoughts?

I appreciate you sending me this email and filling me in on the clinic. This is definitely a hotly-debated topic — and it happens to be a topic that I feel highly-qualified to answer 🙂 And let me preface my answer by saying that I do not know the sprinters coach that you are referring to; so this is in no way a personal attack on any individual, nor does my response have anything to do with Ohio State University. I’d also like to say that I do not think my way of coaching acceleration represents the “football” way of coaching. I feel comfortable saying this because 95% of the football players that have trained with me for their Pro Day or the NFL Combine, were not taught to take “big steps” when accelerating prior to training with me. Most of them actually did the opposite.

Anyway, let’s get right to your question…

There is a MAJOR “loophole” in the track coach’s statement. Here’s what he said…

“When you take larger strides, your FEET are in the air longer, and in turn you can’t accelerate as quickly.”

I agree 100% regarding his thoughts about “being in the air longer” will make you slower. Any athlete who has trained with me knows that I’m constantly yelling at them when they “jump” into a cut, or “leap” instead of run, etc., because you can’t be fast while you’re in the air! But here’s the catch: the reason I underlined & capitalized the word “feet” in the track coach’s statement was because the FEET are not in the air long when athletes accelerate using my technique. One FOOT may be in the air longer, but that’s because the other foot is applying force into the ground & propelling the athlete forward! So, in turn, taking “big steps” actually requires the athlete to have a longer ground contact time, compared to taking shorter, “quick” steps!

**In other words, “my” athletes will always have one foot on the ground, powerfully applying force backwards and FINISHING each stride (which ensures that they’re constantly propelling themselves forward and covering ground)! This is in direct opposition to taking “quick” steps that the track & field coaches advocate. In my opinion, the only way to take “quick” steps is if you’re NOT “finishing” each stride and fully extending. And the only way to get from ‘Point A’ to ‘Point B’ is by applying force backwards to propel yourself forward. These “quick” steps basically get you nowhere fast because you’re not fully extending. What good does it do to take more steps if the steps aren’t powerful enough to move your body forward in space?? (Reminds me of Fred Flinstone every time he tried to start his car! His feet would move fast as hell for the first few seconds, but he didn’t go anywhere!) 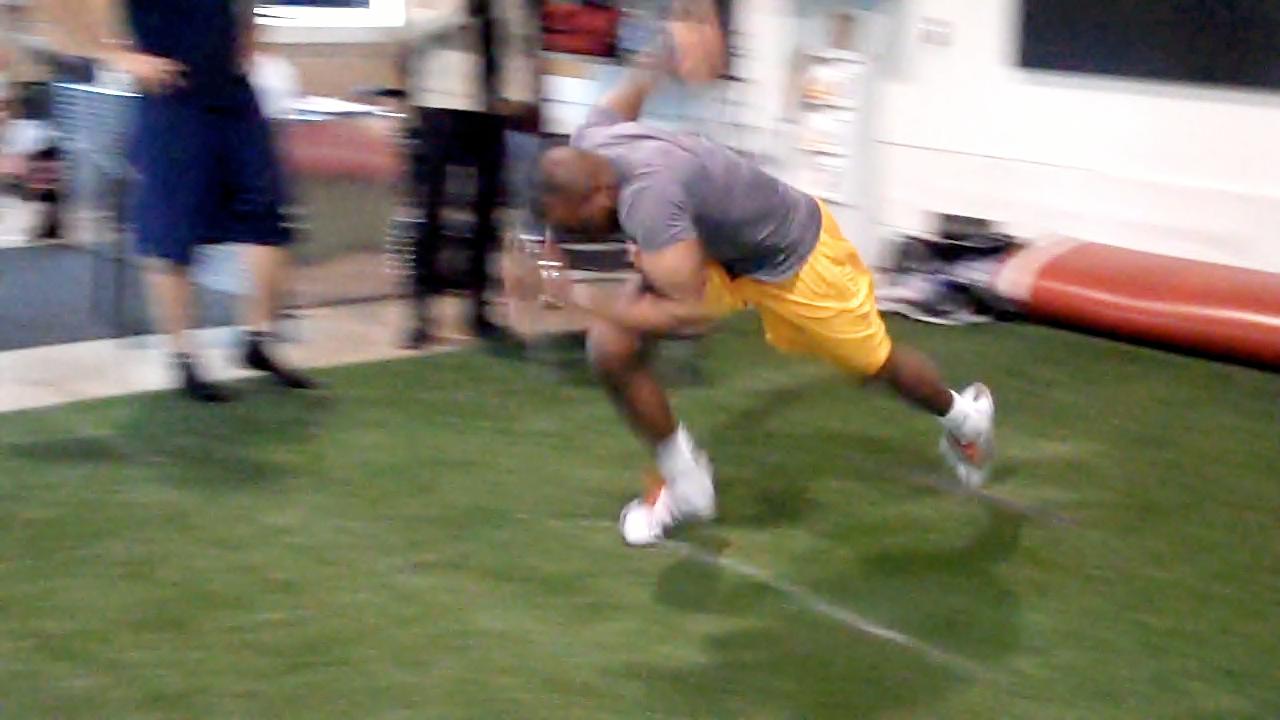 Here is a shot of former Syracuse wide receiver, Donte Davis, taking his first step of a 10-yard sprint. Notice how much ground he covers on this first step! Donte hit the 10-yard mark in 6 steps and ran a 1.56 (electric time) on this particular sprint. During Donte’s initial evaluation with us, he ran 1.81, 1.80 & 1.83 in the 10-yard-dash. During that first evaluation, Donte was consistantly taking 7.5 to 8 steps to run 10 yards. (He “looked” very quick, but his times were slow because he wasn’t “finishing” each stride and covering ground.)

Check out Donte’s feet in the above picture. You’ll notice that BOTH feet are in contact with the ground at the conclussion of his first step! He basically propelled himself forward by pushing (and fully extending) his left leg, as his right knee drove forward. (Notice I said, “forward”…I didn’t use the word “up”. BIG DIFFERENCE.) This would obviously dispute the argument that taking “big steps” is slower because the athlete is “in the air” too long.

When coaching athletes to take “big steps”, one of the key coaching points I hammer into their head is to keep their shins/feet low to the ground when accelerating — you will never hear me say “drive your knees up” or “high knees” when one of my athlete’s drives out of their stance. At my facility, we coach our athletes to “punch the back knee forward“ and “keep the shin parallel to the ground” when firing out of their stance and accelerating. 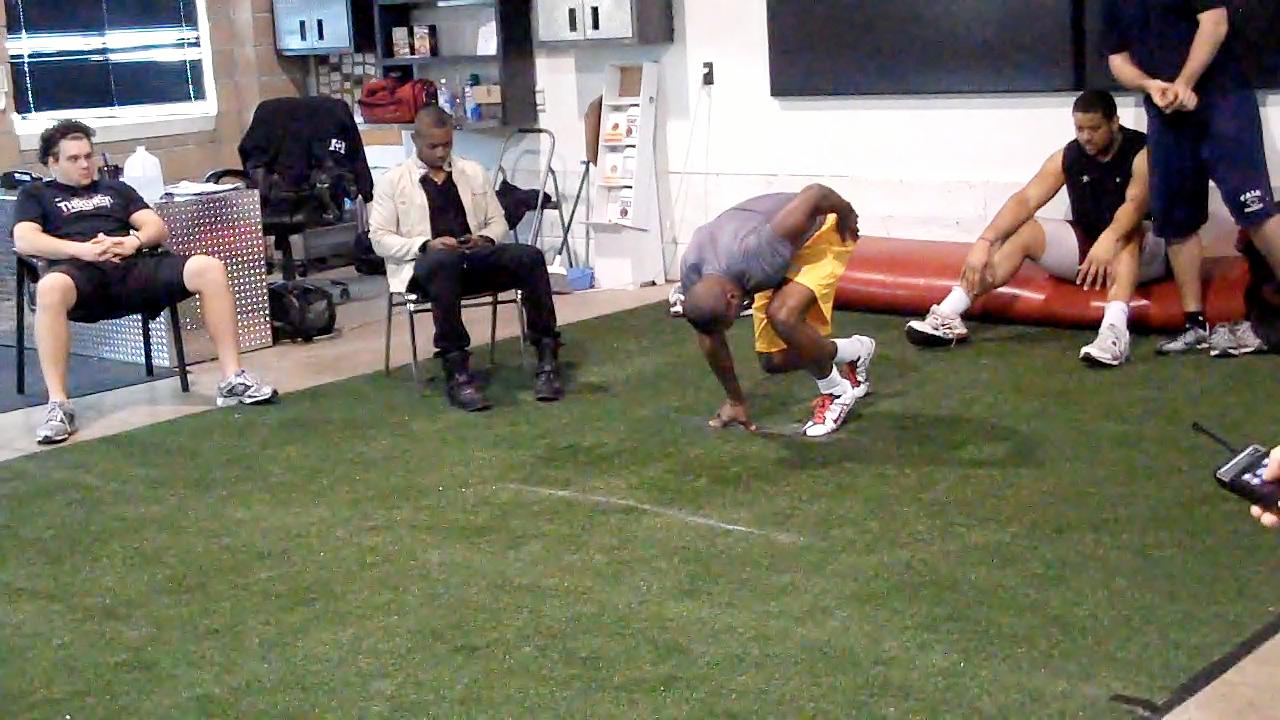 Obviously, it’s impossibe to keep the shin “parallel” to the ground when running; but the intent to do this helps athletes understand my point. If you look at the above picture; this is when I’d be yelling, “Punch your right knee FORWARD!” and “Push the turf BACK with your left foot!” This ensures that as soon as the athlete “finishes” the stride/extension with the back leg; the front leg immediately strikes the ground and continues the cycle. This is why – if coached properly – “bigger steps” DON’T leave the athlete “in the air” longer than shorter steps.

I would like to conclude this post by stating that I was originally taught “proper” acceleration mechanics by two highly respected track & field experts. (One of these experts coached multiple countries in various Olympic Games.)

Both of these coaches taught me to get the feet down “as quickly as possible” when acclerating…they even went as far as to say the back leg should land on the start line during the first step! As a 22-year-old kid with virtually no sprint coaching experience; I believed everything they said. At the time, I had no “real-world” experience so everything they said sounded very logical. So for over a year, I coached every athlete to “get their feet down as quickly as possible” when accelerating. 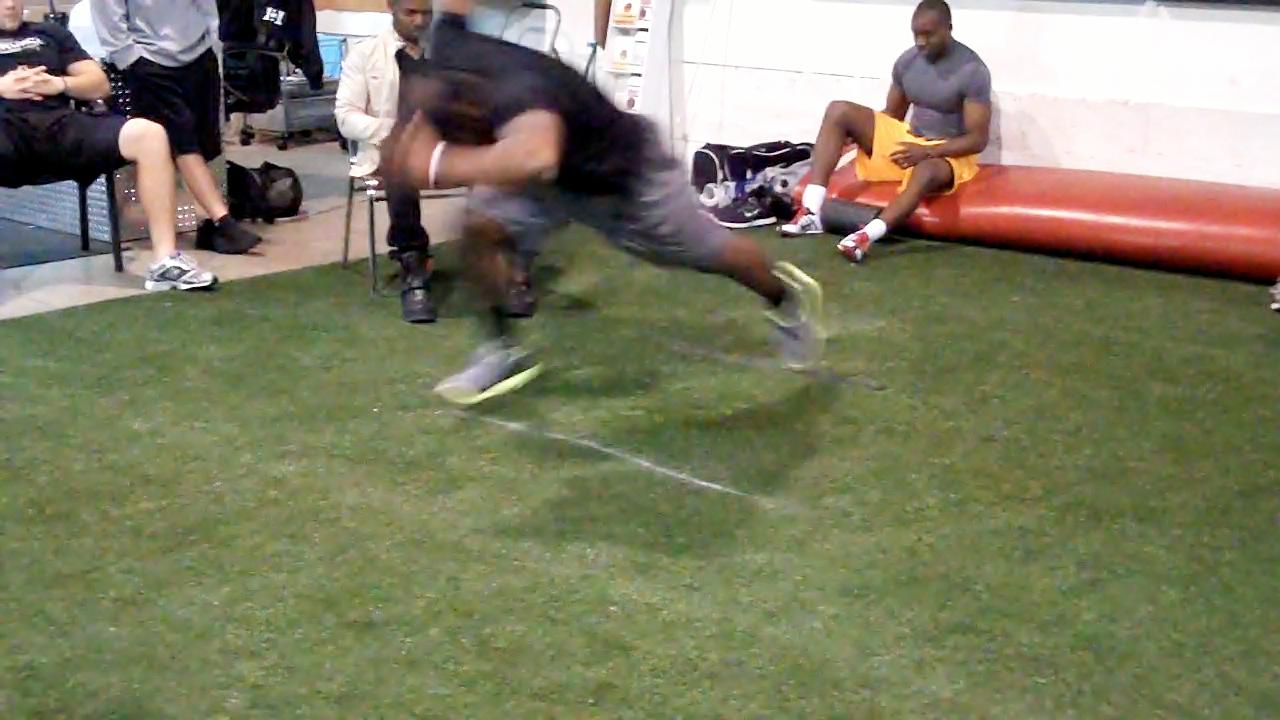 A much better 1st step approach, compared to having your 1st step “get down fast”, yet “go nowhere”…

But then, one day, everything changed. I watched (then) Bears rookie fullback, Jim Finn, run a 10-yard sprint in 5 1/2 steps and his (electric) time was almost 2-tenths faster than all the defensive backs and wide receivers I was training that day. How can that be? He looked so much slower, yet his times were so much faster?! (FYI, Jim’s official 40 time at his NFL Pro Day was a 4.53, weighing 250lbs.!)

The rest, as they say, is history! I spent the next couple of months staying after work (sometimes until midnight) experimenting on myself — running 10’s, counting my steps, recording the times, etc.

It’s now been over 10 years since learning and implementing this technique with myself and REAL ATHLETES. Without trying to sound cocky, I don’t think there are many other coaches out there that have been fortunate enough to coach over 15,000 electrically-timed 10-yard sprints during the past decade. (And FYI, I didn’t just make up a number and throw it out there — I’ve literally coached that many 10-yard sprints…and many of those 15,000 reps were with high-level college and professional athletes. Needless to say, there are NO textbooks and NO “case studies” that can even come close to my decade-long experiment. I guess this is why I’m so passionate/confident on this subject…and maybe a little cocky

I can go on and on with “real-world” evidence regarding the difference that taking one less step in the 10-yard-dash can make on your 40-yard-dash time. 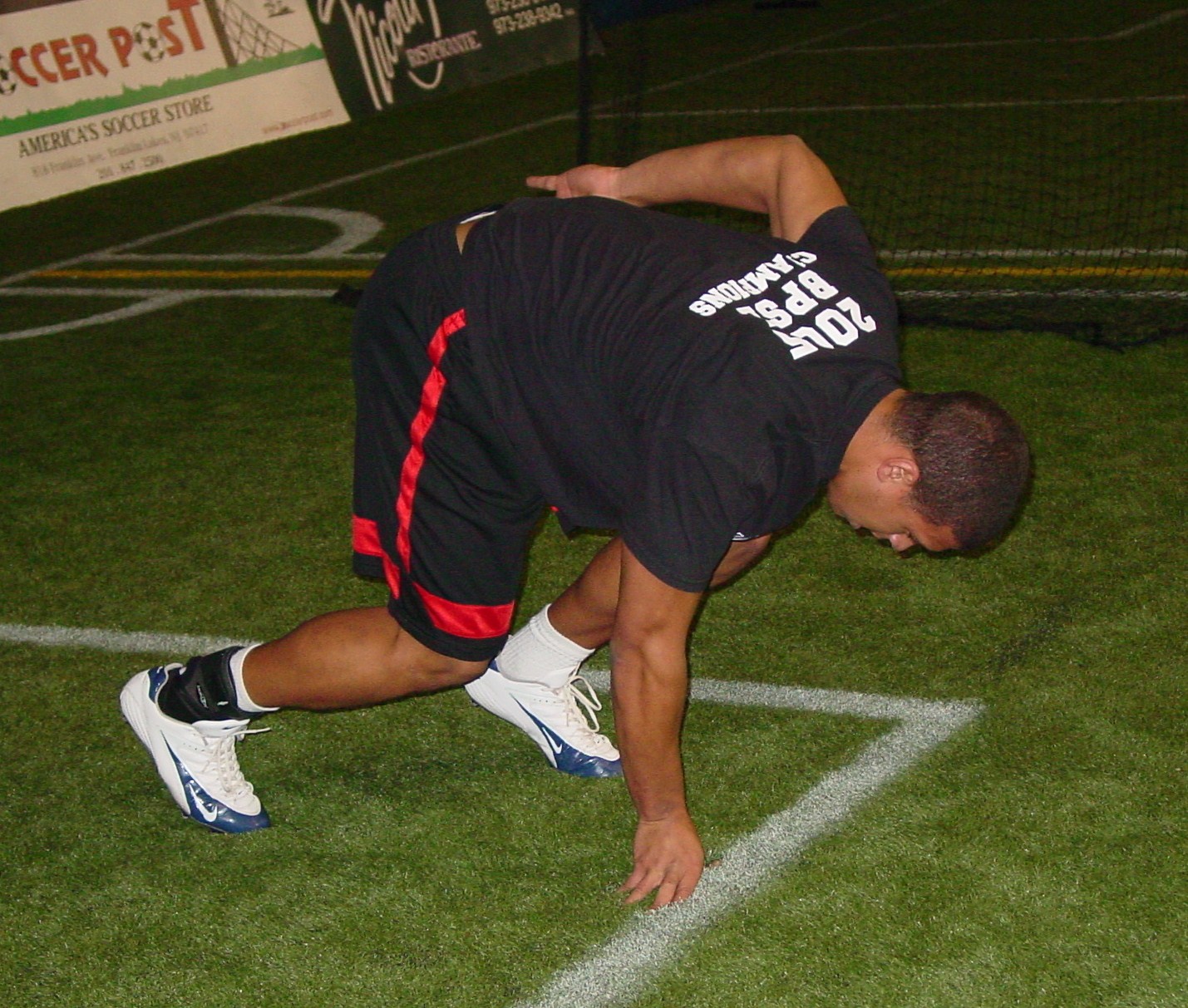 The above picture shows Miles Austin in January of 2006 working on his stance/acceleration technique with me in preparation of the NFL Combine. When Miles took “shorter/quicker” steps – 7.5 steps to be exact – his 10-yard split was 1.77 seconds and his 40 time was 4.62. When Miles took bigger steps and completed his first 10 yards in 6 steps, his 10-yard split was 1.62 seconds and his 40-yard-dash time was always in the 4.4’s. He ran an official 4.47 at the NFL Combine.

I have so many more examples, I wouldn’t even know where to begin. Maybe someday I’ll write a novel on 10-yard sprint technique (although I’m not sure there’s a huge market for it LOL)! But for now, you can just trust me and a decade’s worth of real-world results…

The choice is yours!