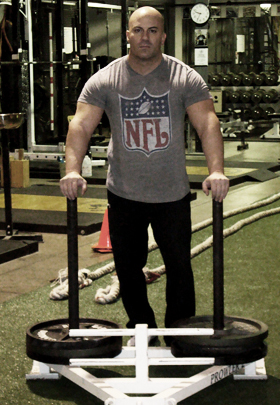 “I’m pumped!” he told me last week. “I never get to talk to anyone about this stuff! This is shit I’ve been really into for years. It really is one of the secrets to my gym’s success. If people are missing this aspect of training, then they’re missing a huge piece of the puzzle. I’m pumped to get this info out there!”

Now I was pumped. I flicked the switch on my digital recorder and Coach DeFranco started talking. – Chris Shugart

Why You Still Suck: The Missing Puzzle Piece

I see them everywhere I look: coaches and trainers with all the right certifications and degrees who just can’t get good results with their clients… or even themselves.

They suck. They know they suck. And they can’t figure out why they suck.

They have the education; the knowledge base is there. They may even have the right gym and all the hardcore equipment. What’s missing then, besides results? An important piece of the puzzle that you can’t learn in school. It’s something you have to learn in the trenches and under the bar.

By far, the most overlooked component of successful training is the mind game: the psychological aspects of physical achievement.

Whether you’re a pro athlete or a gym rat, the mental components of training are crucial. The problem is, they’re not easily defined. Unlike the black and white numbers of training programs and PRs, this stuff lies in a gray area that’s hard to quantify.

Here are five psychological strategies that I’ve learned in my years as a coach that you can use to reach your gym goals.

A few very well-respected coaches don’t allow music in their gyms. They say they’ve read studies showing that it detracts from training. Well, I used to read a lot of studies too, but now that I’m fortunate enough to have a gym that’s packed all the time with a wide variety of athletes, I do my own studies. I don’t have to listen to the “rules” of others who probably don’t even train a quarter of the athletes that I do.

So, I can tell you this with 100% certainly: You put on loud music that the athlete enjoys and he’s going to have improved energy, strength, and mood. He’s going to work harder. Period.

In my gym, the group of athletes working out at that time is allowed to pick the music or bring their own. We’ve had everything from rap and techno to country. Music, without question, is a positive stimulant to the training environment.

I’ve been in training sessions with athletes when I’ve noticed that there’s something missing. It’s just dead and I’m telling them, “Let’s go, guys, let’s fire it up!” Then I realize that I forgot to put the music on!

Turn on the music and the whole mood changes. Guys break PRs. They miss lifts, switch the song to something they like better, and then set a new record. Whatever the mechanism, that new song stimulated them, motivated them, or gave them energy. I’ve seen it happen too many times to deny the benefits. You can’t tell me that music doesn’t improve training. I’ll go to my grave saying it does.

Now, if my stereo didn’t work, would I send everyone home? No, of course not. But you’re not a tough coach by making your athletes lift in silence. Why would you not allow them to do something that’s going to make them feel better, have more energy, and perform better.

Music is a huge part of my gym. And it’s loud all day.

2. Get Mentally Tough… Or Get out of my Gym 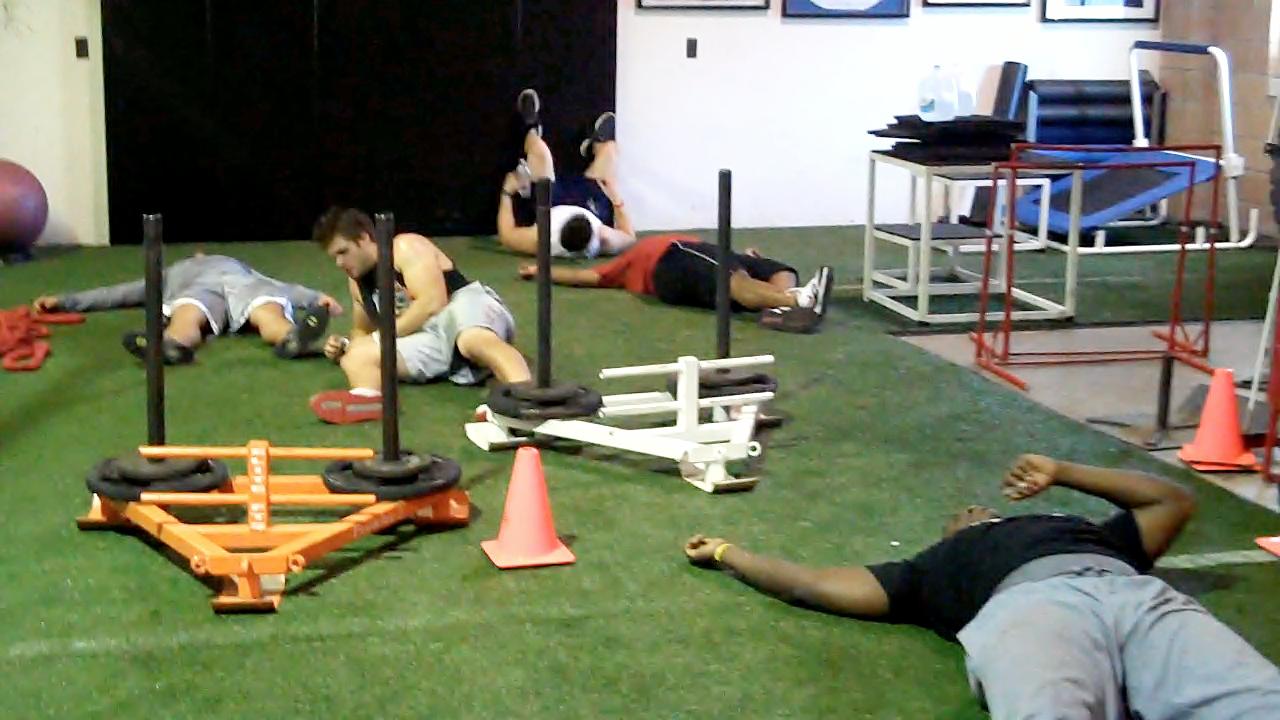 Some people just have it. They’re born mentally tough. But I do think you can take someone who’s “softer” and make them mentally tougher with the right training and the right environment.

I define mental toughness as ‘a psychological edge that enables an athlete to remain focused and confident during high-pressure situations to perform at their full potential’.

Mental toughness is something that displays itself when times are hard and things aren’t going right. You’ll know if an athlete is mentally tough or not during times of duress. He stays on task and he doesn’t get rattled.

You can train that into a kid by developing certain attributes. I start that process with the atmosphere of my gym. Those who aren’t mentally tough are probably going to be intimidated at first.

I have an indoor warehouse facility now with a track and an area for Prowler pushing, but we still go outside year around and train in the parking lot, winter or summer. Want to develop a mentally tough kid? Don’t baby them. What if they don’t come back? Well then, they probably weren’t capable of being developed in the first place. They didn’t have it.

Training environment plays a huge role. Kid walks into my gym and there are a lot of big strong guys and the music is blasting, then I make them go outside in bad weather. But if that kid comes back, year in and year out, he’s going to eventually be immune to heat and cold, loud music isn’t going to affect him, and bigger, stronger guys aren’t going to get under his skin. He’s battle-hardened.

During his sport, there’s not much left that can be thrown at him. He’s faced big guys, he’s trained with them, he’s already competed in brutal heat and blistering cold. Facing those things in his sport is just another day for him.

Our atmosphere has built the foundation for mental toughness.

3. Invite the Zen of the Zone 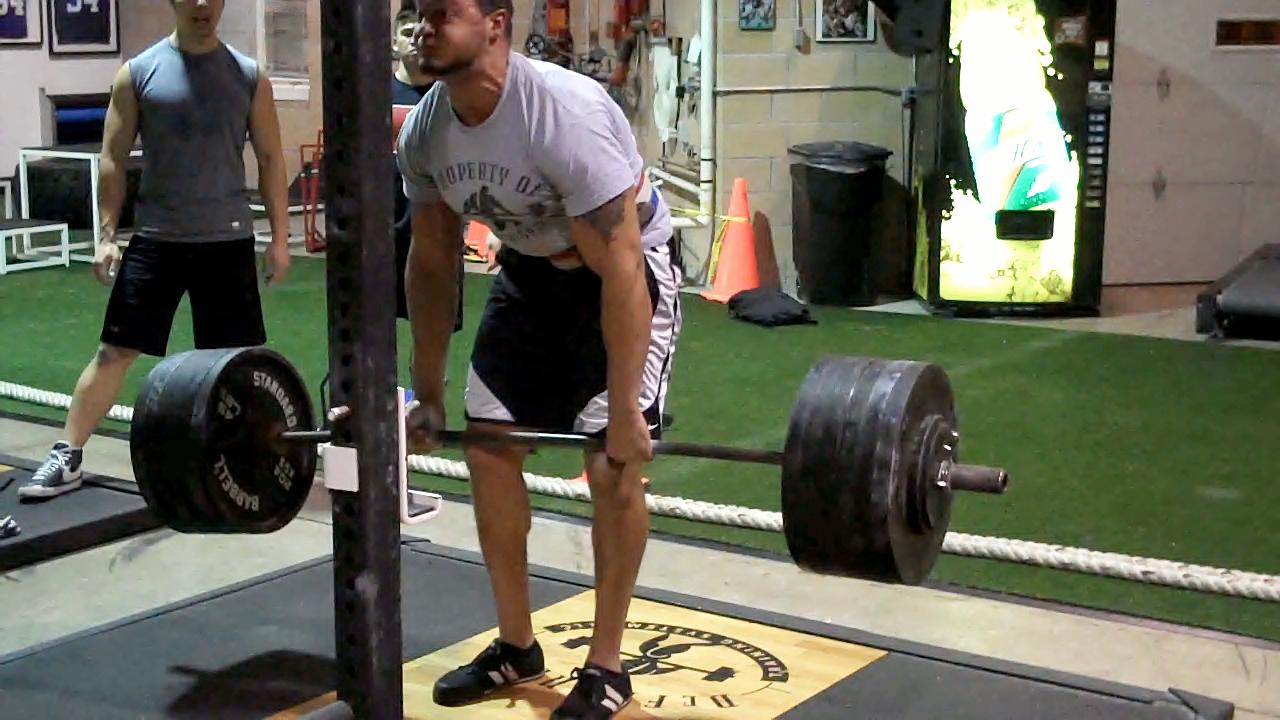 Are you “in the zone” when you train?

The zone is a state of consciousness where the athlete’s skills perfectly match the performance requirements of his particular sport. It’s almost like an out-of-body experience, and it seems effortless.

Many believe that this perfect zone is related to the secretions of certain endorphins in your brain like epinephrine, norepinephrine, and dopamine. Being in the zone is a natural high.

Can you turn it “on” and get into the zone at will? Probably not. But I know for a fact that preparation will increase your chances of getting into that ideal performance state. When you practice smart and train hard, when your preparation is good and you practice religiously over a long period of time, you invite the zone to appear.

Dedicate yourself to your craft and the zone will find you.

4. Believe in the Program 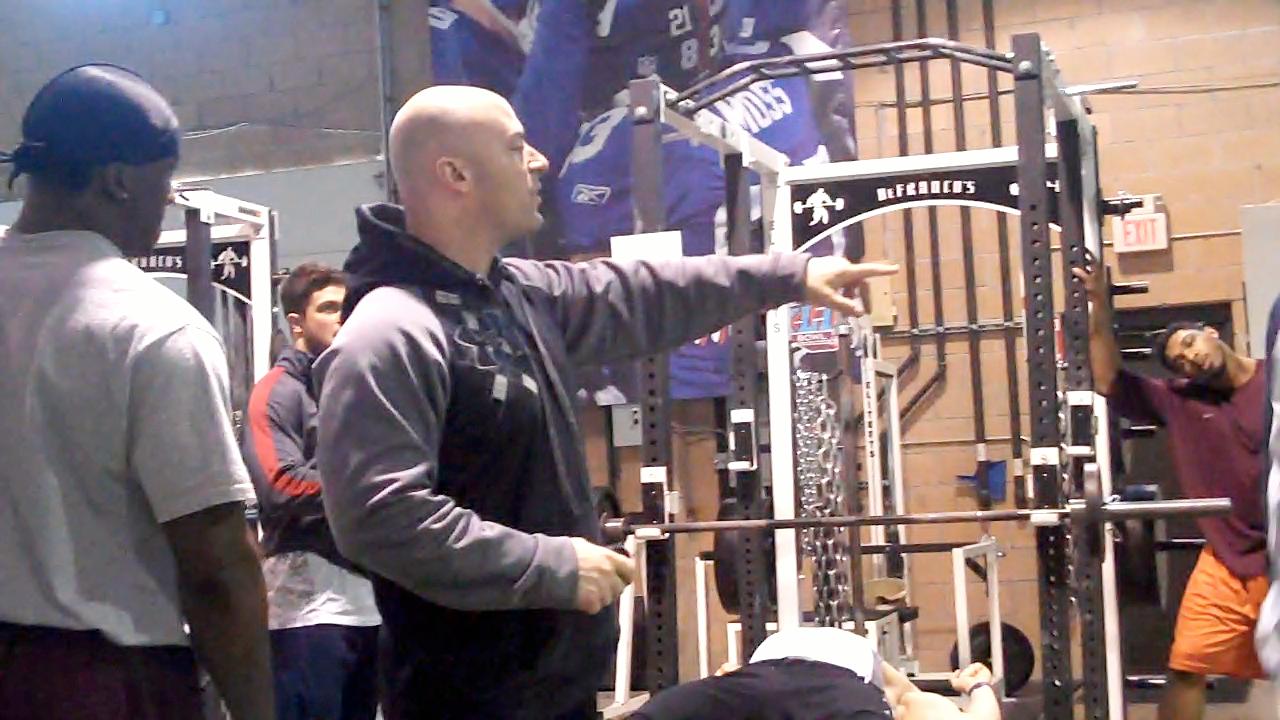 I think that the way I train my athletes is the best way possible based on what we know today about improving human performance. But the important thing is that the athlete believes it.

No matter how hard you work them out, the athlete will never reach his full potential in your program if he doesn’t believe in what you’re doing. He doesn’t need to know all the science, but he must believe that what he’s doing is going to give him what he needs.

This is why I “decorate” the gym the way I do. I’ve got All-Pro jerseys from NFL guys and pictures of them in the facility training. 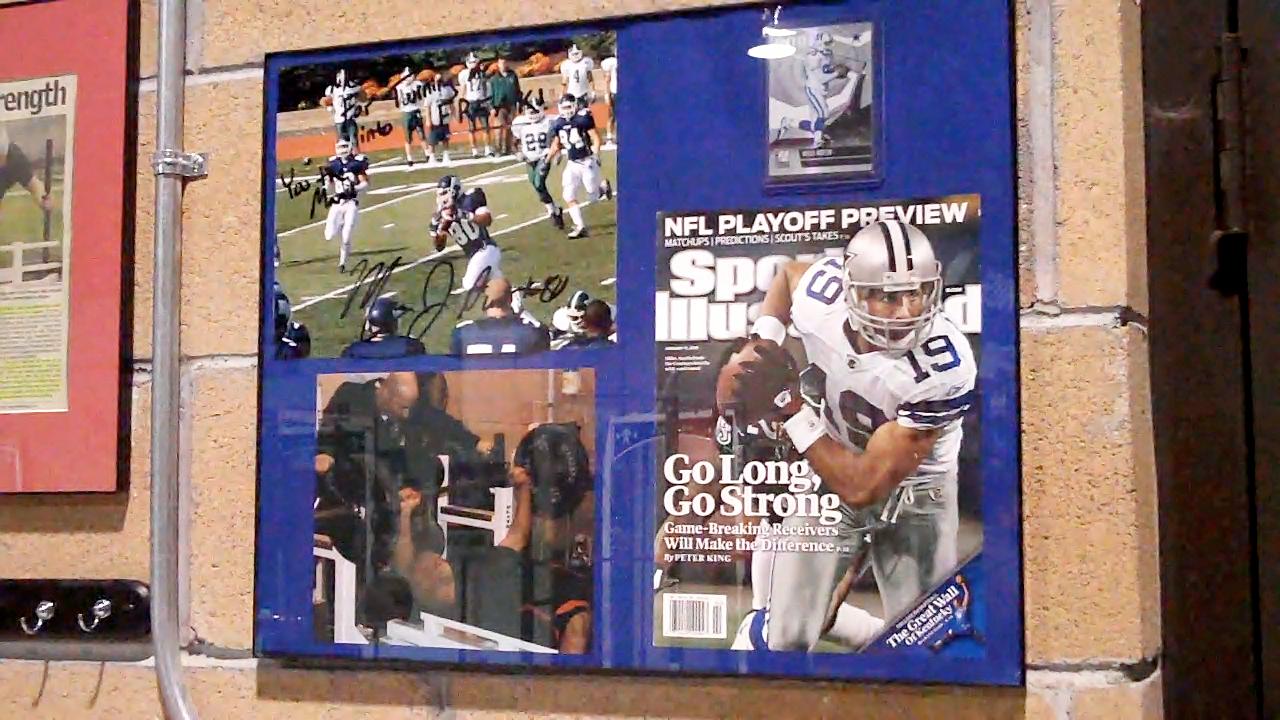 If you’re a high school kid and you walk in and see Miles Austin’s All-Pro jersey and an autographed picture from him that says, “To Joe, thanks for turning me into a freak!” then you’re going to believe that this type of training can do the same thing for you.

You’re going to buy into my program even more; you’re going to listen to what I have to say. You can just see someone work harder once he really believes in what he’s doing. 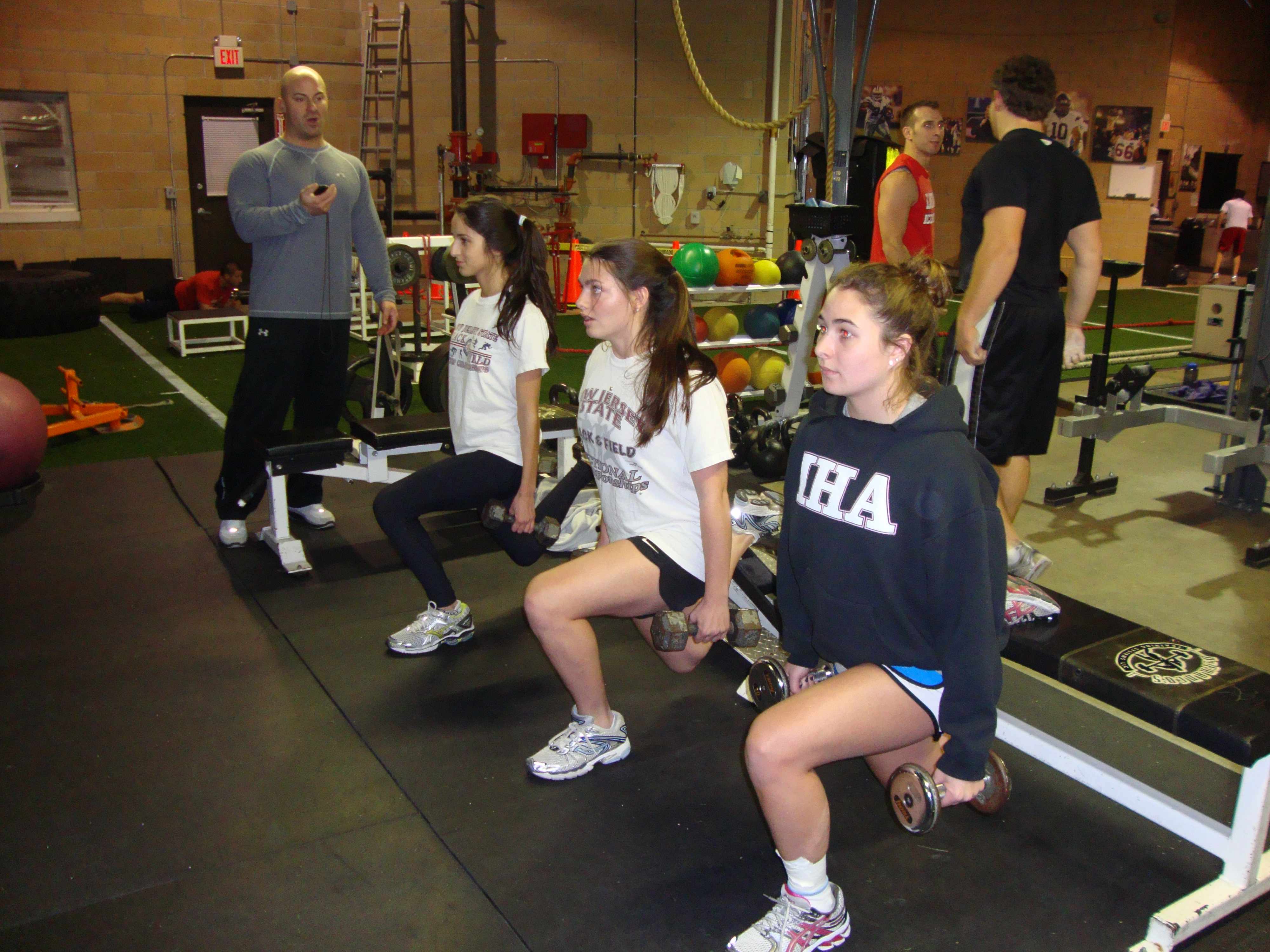 “Joe, you’re so different from hour to hour,” said my girlfriend, who works with me at the gym.

She’s right. I call it bi-polar coaching. My coaching style shifts depending on who’s coming in to train. I have some college football players that respond better when I get in their faces and call them pussies. That’ll make them do anything.

But that’s not going to work with a 15-year old female athlete who walks into the gym for the first time looking scared. I’m not going to get into her face; she’ll never come back. Instead, she gets the kinder and gentler Joe D.

Female athletes often need reassurance and explanation. They need to know we’re not going to make them “big.” Instead we’re going to make them stronger and less susceptible to injury. Once they’re comfortable in their surroundings you can begin to push them, sometimes harder than the guys.

The point is, first impressions count. The good coach or trainer has to treat everyone a little differently. You have to be able to read the athlete. It’s not just about the X’s and O’s of training, or the methods or science of the program. It’s about being able to look at an athlete and get a sense of his demeanor and personality. Adjust your approach based on that and you’ll get the most possible out of the athlete.

Why is my gym successful? Combining scientifically sound training programs and progressions with a killer atmosphere and the ability to cater to each athlete’s individual psychology. That’s bi-polar coaching: figuring what makes that kid tick, then using that to your advantage.

I’m not the smartest guy in the world or the most scientific when it comes to this field. But what puts my gym’s results over those others who might be smarter than me is my ability to get the most of my athletes by knowing when to be a hard-ass and when to be a little softer.

You have to know when to explain the science behind what you’re doing in the workout and when to just put the guy through the workout and talk to the athlete like a second grader. Some people don’t care about the science; they just want results. Others want to know the ins and outs.

Some people think that pro athletes love lifting. Pro athletes get paid millions of dollars to play their sport, and they’re obviously skilled at it. Lifting and running and stretching are just parts of their job. For a lot of them it’s a part of their job that they don’t necessarily like.

Pro football players’ bodies are banged up. They’ve been working out since they were twelve years old. By the time they’re 30, coming to the gym isn’t fun. These guys don’t need to know the science behind the program. They trust the fact that I did the research. They don’t want to come here and be bogged down with explanations. Tell them why you’re doing it – to help rehab an injury, to get faster, to get stronger – and they’re just going to do it.

Some coaches try to be hard-asses all the time. They try to be tough and make their athletes throw up. Then you have the guys who are well-educated and they push that education onto their athletes, but the athletes couldn’t care less.

That coach bores the athlete who just wants to get his workout in and get the hell out of there. If you’re a versatile, bi-polar coach, then you can learn which athletes want that stuff and which don’t, then adjust accordingly.

If you can’t read the athletes, then your results with them aren’t going to be what they should be.

How do you make these mental strategies work for you? Simple:

For some athletes, these mental components are as important as a solid training program. For others, they’re even more important, because you can’t have effective workouts or optimal performance on the field of play if you don’t first get your head straight.

Accomplish that and you can accomplish anything.