My first ‘ASK JOE’ column appeared on this website on July 18th, 2003. During the past 5 ½ years, I have posted a ton of training info and lots of exciting announcements. But I must admit that NOTHING I’ve ever written could compare to this post…

After 18 months of filming, interviewing, drama and delays, STRONG is finally available on DVD! I’m sure you’re all probably sick of hearing me talk about it, so I’m going to keep this post short and sweet.

Two weeks ago I was given one copy of the final cut of the documentary to review. Simply put, I was blown away by the final product. It was surreal to sit and watch a real movie about my gym, my family and all the athletes that have impacted my life in such a powerful way. The only two documentaries that have ever given me a similar feeling were Pumping Iron and then the more modern-day training documentary, Body of Work, which Bill Phillips put out when EAS was on top of the fitness world. But, I can honestly say that STRONG is the best of the bunch. STRONG has more intense training footage, more motivational stories, surprising comic relief, and it’s more real. But, why the hell should you listen to me, right? After all, my opinion may be a little biased. So after I watched the documentary, I sent my only copy to the one man in the industry that I knew would give me a brutally honest review. That man was Dave Tate – founder & owner of Elite Fitness Systems. For those of you that don’t know Dave, he doesn’t sugar-coat anything! He also has more experience in this industry than anyone I know and he’s not afraid to tell it like it is! 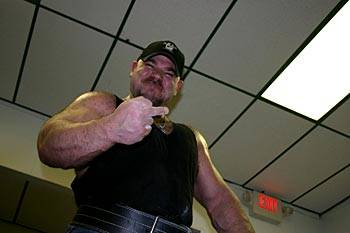 This is why Dave’s review of STRONG is so meaningful to me. I know for a fact that if Dave didn’t like it, or he thought some things should be changed, he would have no problem telling me! So without any further ado, check out what Dave had to say about STRONG…then do yourself a favor and pick up the movie today!!

Getting stronger.  Unlike virtually any other discipline in life, there is a special bond between people that train for strength. No matter what walk of life you’re from – rich, poor, fat, skinny, black, white, young, old, intelligent, simple, and everything in between – everyone is equal when they’re ‘under the bar’.

Following this simple premise of “equality”, STRONG is one of the most inspiring documentaries I have ever watched.  From a future NFL recruit with a tough background, to a 13 year-old struggling wrestler, to a 40 year-old executive who just overcame a severe illness – and a well-to-do athlete seemingly unaffected by today’s economy – all
share one common goal – getting stronger.

This documentary is emotional on so many levels. It’s about that drive for self-improvement and never giving up. It bleeds persistence and overflows with blood, sweat and tears. It highlights adversity and setbacks, demonstrates resolve and courage, and is about digging until you reach your most deep inner self. But above all, it’s about emotion.

Following Joe DeFranco throughout an entire year, STRONG provides a glimpse into the life of a man that lives to bring out the best in people.

*After Dave sent me his review, I was given a couple more copies of the documentary. I gave these copies to the people who attended our ‘Secrets of Strength Development Seminar’ on December 6th & 7th. Here is just some of the feedback I received…

“Joe, I watched the movie two times in a row when I got home and I must say I really enjoyed it. I am not trying to kiss your ass here but I watch a lot of documentaries on different topics and this one is one of the best I have seen; not because the subject matter is what I like, but because it is “real and honest.” Many documentaries are watered down and only show one side of things. By showing the different athletes from different backgrounds coming together for a common goal and achieving that through hard work, it was pretty powerful. A sign of a good documentary, for me, is the ability to spark emotion. There were three parts that choked me up…Deon, Mitchell and your mom.  Thanks for being so open and sharing your life and the life of your athletes.”
-Doug Fioranelli

“Joe- I just finished watching your movie…It was unbelievable! I want to get to the gym and kill some iron!  Your family, both at home and in the gym, are incredible and inspirational!  Keep up the great work…”
–Matt Bernardo

“This movie was unreal – it will send you running to the gym to kill it! I will not be surprised if some of you watch this movie and end up breaking into your gym! I kid you not!”
-Zach Even-Esh
www.UndergroundStrengthShow.tv