The first blog post today is a guest post from Mike Guadango regarding Sports Adaptation. This topic came up last week when a high-level volleyball player came into DeFranco’s for his first training session. 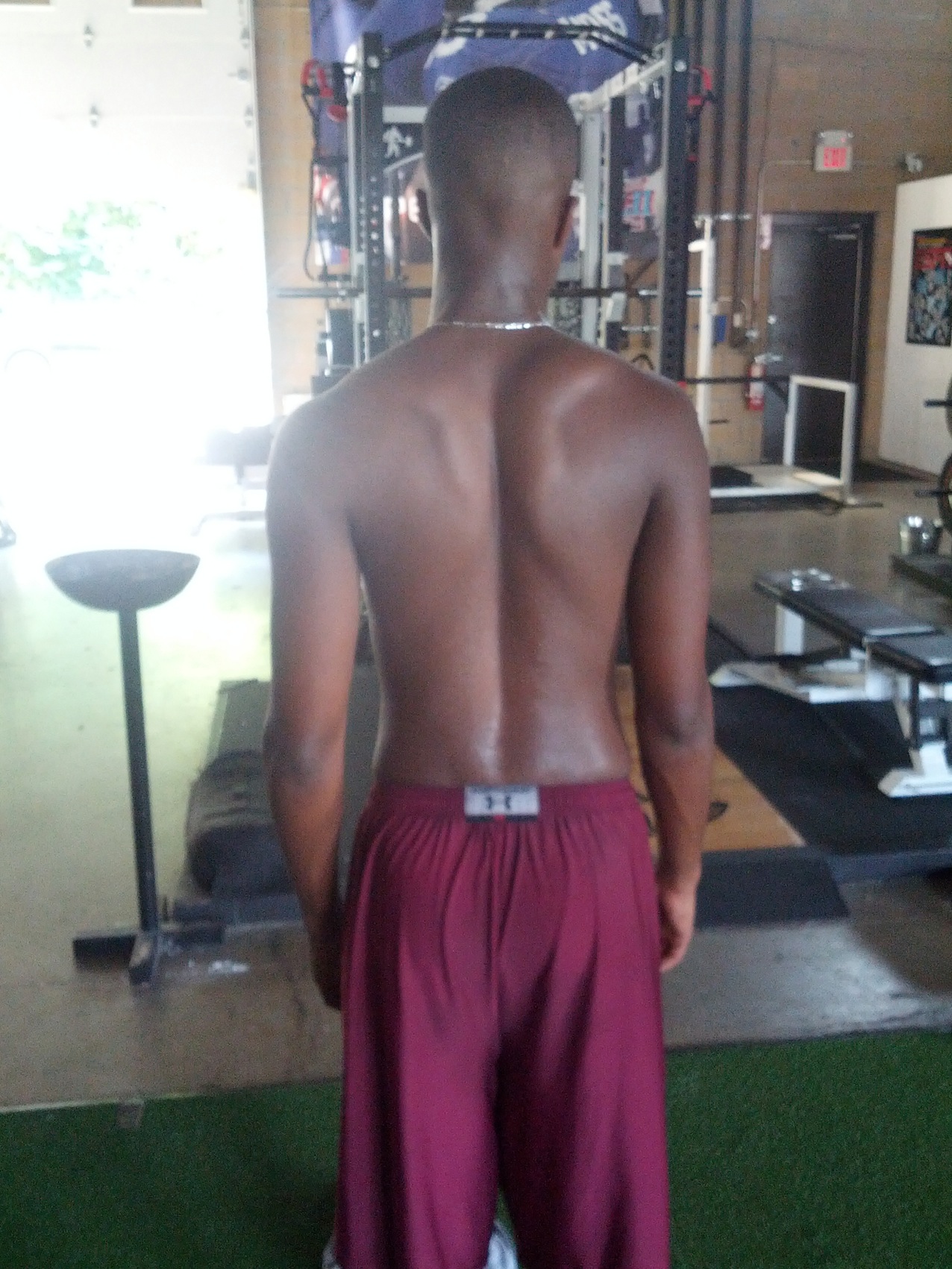 The above photo gives you a look at the back of a high level high school volleyball player. As you can see, this athlete appears to have a hyperactive right trap. Typically this occurs due to some kind of dysfunction with the rotator cuff or scapula stabilizers.

Interestingly, this athlete does not have any rotator cuff dysfunction on the right side. The humeral head does not superiorly migrate when the rotator cuff is/should be activated. Nor does the scapula wing (laterally slip or glide away from the spine), which is typically indicative of scapular instability – particularly in the serratus anterior. Not to mention, the hypertrophy doesn’t just occur in the upper trap, it extends down through the scapula retractors and even his latissimus dorsi have hypertrophied. You can see a distinct difference in muscular and postural development between the right and left sides.

He has simply acquired what’s called a sports adaptation. The organism’s (in this case the organism is the athlete) #1 priority in its existence is survival. Its job is to adapt to any stimulus thrown upon it. So, when an athlete plays a sport long enough, they will adapt however they can to survive the activity with limited damage acquired. Whether it be physical or psychological, they will adapt.

In this specific case, the organism plays competitive volleyball and he has been extremely successful. Adaptations have occurred to contribute to his success. The muscles that contribute to deceleration have hypertrophied to compensate for the excessive amount of force generated through the overhead range of motion.

Unfortunately for athletes like this, people that perform universal ‘movement screens’ will tell him that he needs to “balance out” the asymmetries. That will kill his game and could potentially lead to injury. However, don’t be mistaken, I’m not necessarily in favor of increasing the imbalance caused by the adaptation. I’m just not necessarily, “pro-symmetry”. I’m for improving performance, not aesthetics.

Make sure you educate yourself on the difference between sport adaptation and dysfunction (overuse injury) from sport participation.

To read/see more “real world” examples regarding this topic, check out this blog post on rotator cuff dysfunction >> What Do YOU See?

I absolutely love your site and all the information & inspiration you provide your readers. Your passion and knowledge is apparent. Enough kissing up now onto my question – At the beginning of the summer you posted your 2012 summer football training template you were using with your NFL clients this year (thank you for sharing, btw.) Being an avid follower of Charlie Francis my entire career (my background is in track & field) I was wondering your thoughts on his high/low system? Have you ever used this approach with your football clients or is there a benefit from performing multiple high intensity days in row? Thanx for your time coach. When you talk I listen.

For those who may not be familiar with the “High/Low” approach to training, here’s a simple explanation…

The High/Low approach is a very logical (and proven) system for training athletes. I definitely “agree” with it.

With that being said; there is more than one way to “skin the cat” and there are always exceptions to the rule. One example would be young athletes who are in the beginning stages of their “training career”. Their training outputs aren’t as high (in the weightroom or on the track) so they can run, jump and lift all day without overtraining.

NOTE: When I first started training with my dad, there was no such thing as a “low” day. When you train with George DeFranco; you train at 110% intensity on every rep of every set of every workout lol! (By the way, I wouldn’t have changed it for the world. Those were the most memorable workouts of my life.) I trained as hard as I could every single day and I turned into a BEAST! We were never concerned with “overtraining”. In fact, I didn’t even know what it meant to overtrain…and it didn’t seem to matter! But – like everything else in life – all good things eventually come to an end lol! Unfortunately, you can’t get away with training “balls out” every single day for your entire athletic career without negative consequences. The more advanced you become; the more you must pay attention to your training variables (volume, intensity, duration, etc.) This brings me to your question…

Why would I have NFL athletes performing two or three “high-intensity” days in a row?

The answer lies in the duration of the training cycle. Private coaches/trainers who work with NFL athletes during the summer know that we only have about 4 weeks with them during this specific period. Experience has proven to me that (most) advanced athletes can “go hard” multiple days in a row during a training cycle, as long as it’s a short (2-4 weeks) cycle that’s followed by a deload. In the specific case of my NFL crew this year; they trained with me for 4 weeks and then they all had 5-6 days to taper before training camp. I was extremely impressed with the results and feedback from this years “pre training camp” program. The increases in speed, power output and football conditioning were apparent. More importantly, their bodies felt better than when they arrived in New Jersey one month prior. (This doesn’t mean that “my way” is the only way; it just means that this specific template worked well for my NFL crew this year so I’m sharing it with my readers.) 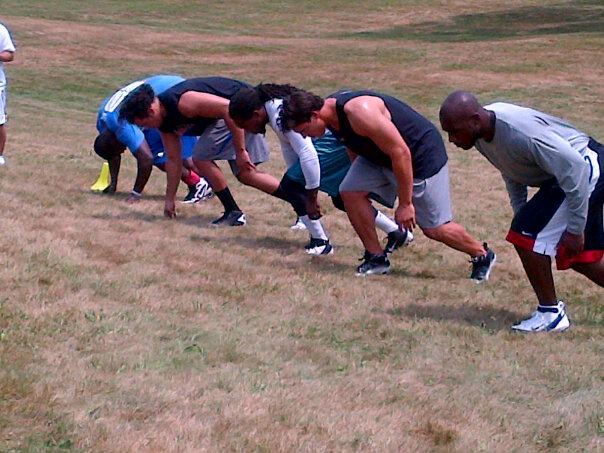 FINAL NOTE: Most coaches and sport scientists love to talk and write about how training is a long-term process…and I agree with this 100%. It is a long-term process. BUT, the reality (for those of us who actually train athletes for a living) is that we must deal with short-term planning, programming and “quick fixes” on a daily basis as well. For example, an “aggresive”, short-term program may be necessary for a college football player to accelerate gains in order to impress an NFL scout at his Pro Day. If he doesn’t impress the scout, his career is over. But, if he does impress the scout and makes the roster — he may then have an opprotunity at a “long-term” career. In this specific example, a long-term career may not have been possible if the coach stayed conservative with his short-term programming.