When people ask me what are the biggest differences between designing strength-training programs for females compared to males, my answer usually surprises them. That is because the basic principles should be the same for both genders: train bodyweight exercises before using external resistance, train the core (abs & low back), favor multiple-joint exercises instead of isolation movements, and focus a good deal of their training on the “posterior chain” (hamstrings, gluteals and low back).

Despite the many similarities of male and female strength training, there are subtle differences to consider. First of all, females mature earlier than males. Therefore, in general, females can begin strength training earlier than males. Also, since females have less muscle mass, on average, than males, they are also more susceptible to deconditioning. That is why a female strength-training program should have the athlete continue to train during the competitive season. This is because the drop-off in strength is more dramatic for females when strength training is stopped.

Overall, strength training offers female athletes the same benefits that it offers male athletes! Regardless of their sport or gender, any athlete can benefit from increased sprinting speed, strength, balance, decreased body fat levels and a reduced incidence of injuries – all of which a properly designed strength-training program can provide. Also, studies have proven that strength training can have a positive effect on bone density, which will decrease your risk of osteoporosis later in life.

Even with all of the positive research out there with regards to strength training and female athletes, I still get asked the same question all of the time, “Will I end up looking like a man if I lift weights?” The answer is, “Absolutely not!” Much of the difference in muscle mass between males and females is attributed to hormones, specifically, testosterone. On average, men produce ten times more testosterone than females. Unless you’re a female who is taking anabolic steroids or other male hormones, lifting weights will NOT make you look like a man! Also, there is a difference in muscle mass distribution between men and women, especially in the upper body. So it is important to remember that male hormones and muscle mass distribution are the two main reasons that men usually carry more muscle than woman. These are 2 of the main factors why men who strength-train look more “bulky” than females who strength-train. 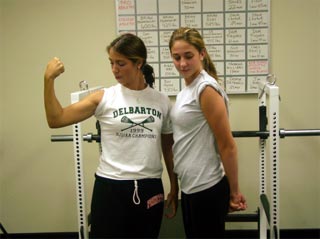