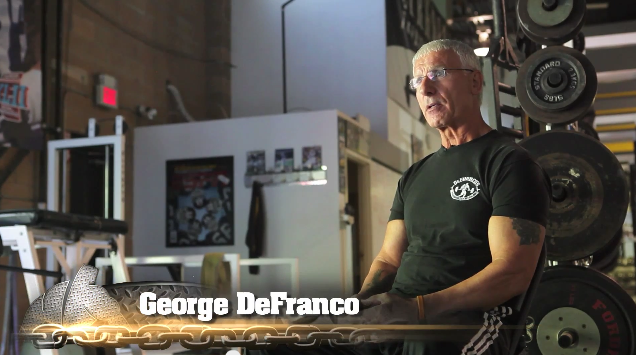 Joe D. starts the podcast off by letting everyone know that his dad (George DeFranco) hates speaking on camera and doing interviews. So Joe lets him get in the groove by giving him a nice warm-up question that he’d be comfortable with…He asks his dad to list 3 THINGS THAT PISS HIM OFF the most! George can’t narrow it down to 3, so he gives 5! One of the things he hates is when people do their job “half-assed”. Right away, George gives us lessons that would make this society a better place and the lessons carry through for the entire episode. He gives you what might be a preview of a potential weekly segment on the show called, “Stuff That Pisses George D. Off!” If you like that idea and want Joe to bring him back for some more, tweet @DeFrancosGym!

George then tells his story, starting with his fitness background. He graduated high school as the ORIGINAL Skinny Bastard, weighing 149lbs! He was such a great baseball pitcher that he had an offer to play for the Cleveland Indians, but was drafted to the Army. Thankfully he was stationed in Korea, not Vietnam. When he returned home, he still had an offer to play for the Indians, but he wasn’t the same pitcher. He thinks he got too muscular from all the lifting he did (without any attention to stretching) during his time in the military.

This was when he turned his attention towards becoming a NJ State Trooper, a career in which he performed admirably, rising to the level of Lieutenant. Along the way, he always stayed in terrific shape, always getting stronger and always competing – most notably in arm wrestling and powerlifting competitions. He was a World Champion level arm wrestler, going up against legends like Al Turner, who held the crown for years. During his career in the NJSP, his strength came in handy multiple times to save his own life, as well as the life of others.

During these years, George trained at a small gym named Empy’s Barbell Club. Empy’s was in such a bad area of New Jersey that guys used to check and see if their car was stolen from the parking lot in between sets during their workout! It was here where Joe’s love of lifting and the life of strength began. Many of us had no idea what a legendary trainer George D was and you get to hear some of his philosophies that still ring true today. You also learn some of his “Jedi mind tricks” that got Joe and Steve Collins to exceed their wildest expectations for themselves.

While Joe doesn’t answer your questions this week, he gives you answers to questions you didn’t know you had…

Above all else, the underlying theme that you will learn from episode #3 of the Industrial Strength Show is the experiences and education that Joe learned from George. This will help you understand WHY Joe has become the trainer and person he is today. It’s a throwback episode with some George DeFranco stories that remind you of the times when things were simpler, but people grew up with a sound foundation of ethics.