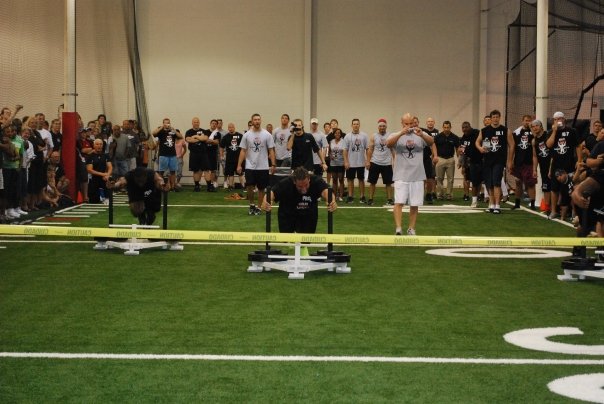 Ok, I appologize. I haven’t checked my “Ask Joe” email account in over two weeks. The summer is always insane, but this year we added to the insanity with all the preparation that went into our World’s Strongest Athlete Competition. And I know that no one gives a shit, but on top of the endless work hours, I moved. Everyone knows how time-consuming moving can be…and how bad it can suck! Needless to say, free time has been almost impossible to find. But, I’m back and hopefully I’ll be posting regularly again from this point on.

The thing that prompted this post were the first two “ASK JOE” emails I just read. Basically, the first two emails that I opened were from “fans” of ours that are PISSED because I haven’t posted any summer training updates since the World’s Strongest Athlete Contest. So to hold our angry “fans” over, I’ve decided to post a couple quick highlights from the past two weeks at our gym. (FYI, if you’re on FACEBOOK, don’t forget to “friend” DeFranco’s Gym as we make quick posts and updates daily on our Facebook page.)

So without further ado, here’s some random things that went down over the past two weeks…

Brian Cushing re-writes our Record Board before Training Camp! 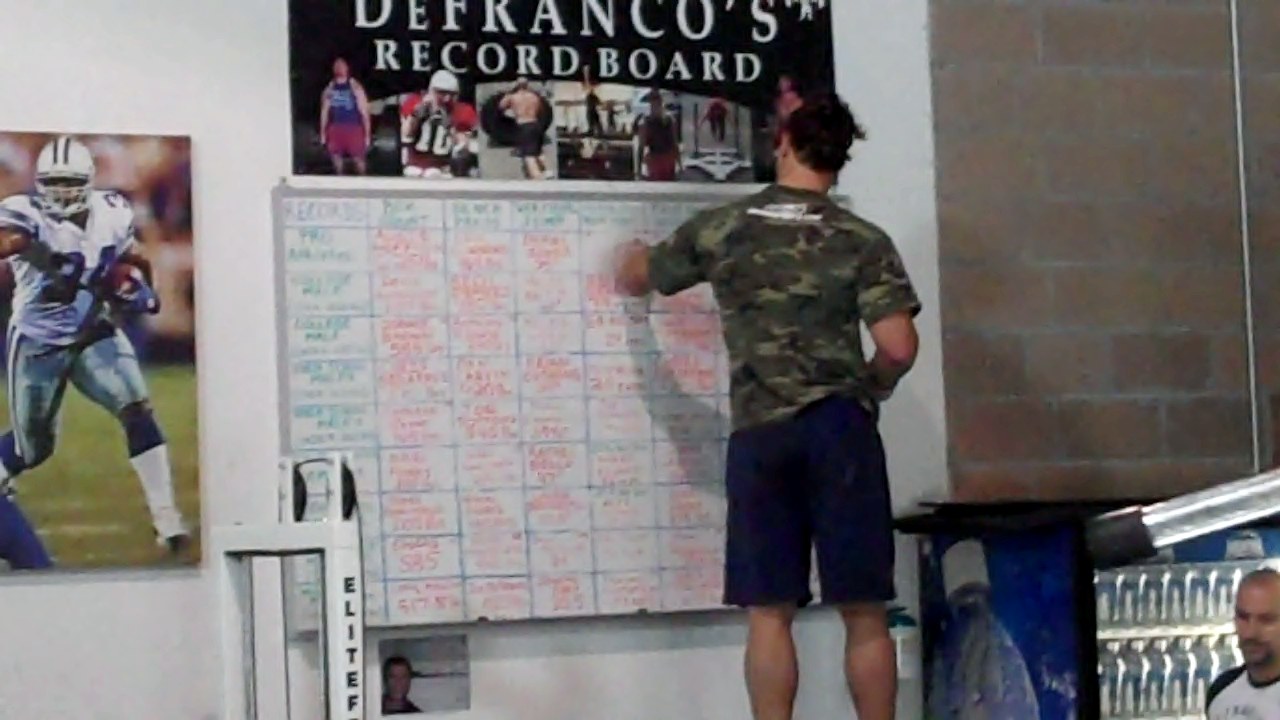 Cush broke our 225-pound bench press rep test record in the Pro Athlete Division the day before leaving for training camp! The previous record was held by former Kansas City Chiefs defensive tackle, Eric Downing (33 reps), and it stood for 7 years!! Watch Cush EXPLODE through 35 angry reps in the video below…

Mackenzy Bernadeau is no longer an “unknown” NFL player! 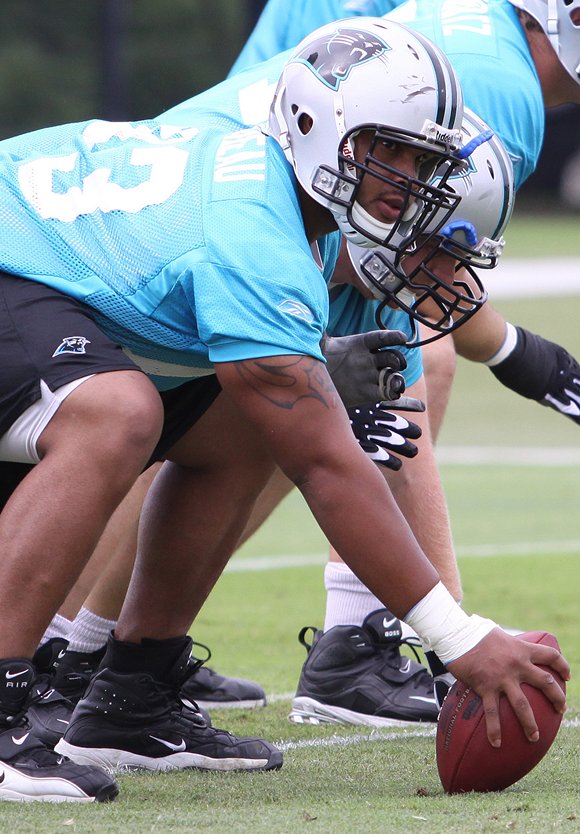 Not too many people outside of our “gym family” know too much about Mack. If you search “Mackenzy Bernadeau” on this website, you can learn more about Mack’s incredible road to the NFL. Basically, he wasn’t supposed to “make it”. He came from a Division II school and he didn’t even get a Combine invite because he was undersized, too slow, hurt and “not strong enough” to handle himself against the BIG BOYS in the NFL!

After winning our World’s Strongest Athlete Contest for the 2nd year in a row; NFL players throughout the league have now taken note! Check out THIS POST that was on ProFootballTalk.com. For those of you that don’t know, “Pro Football Talk” is THE website of choice where NFL PLAYERS get the scoop on what’s going on throughout the league! 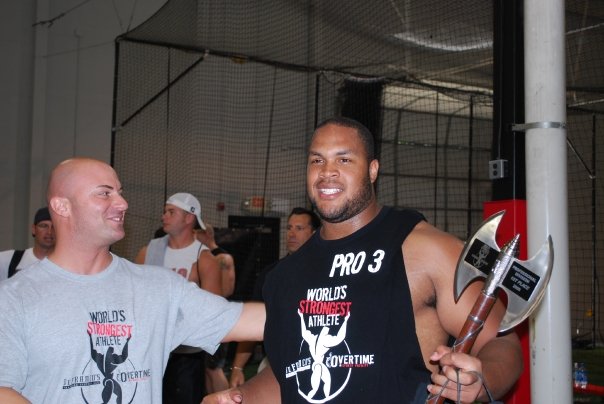 Defensive lineman now know that Mack is “strong enough”…and he’s got some badass weapons to back it up!

Speaking of our Strongman winners… 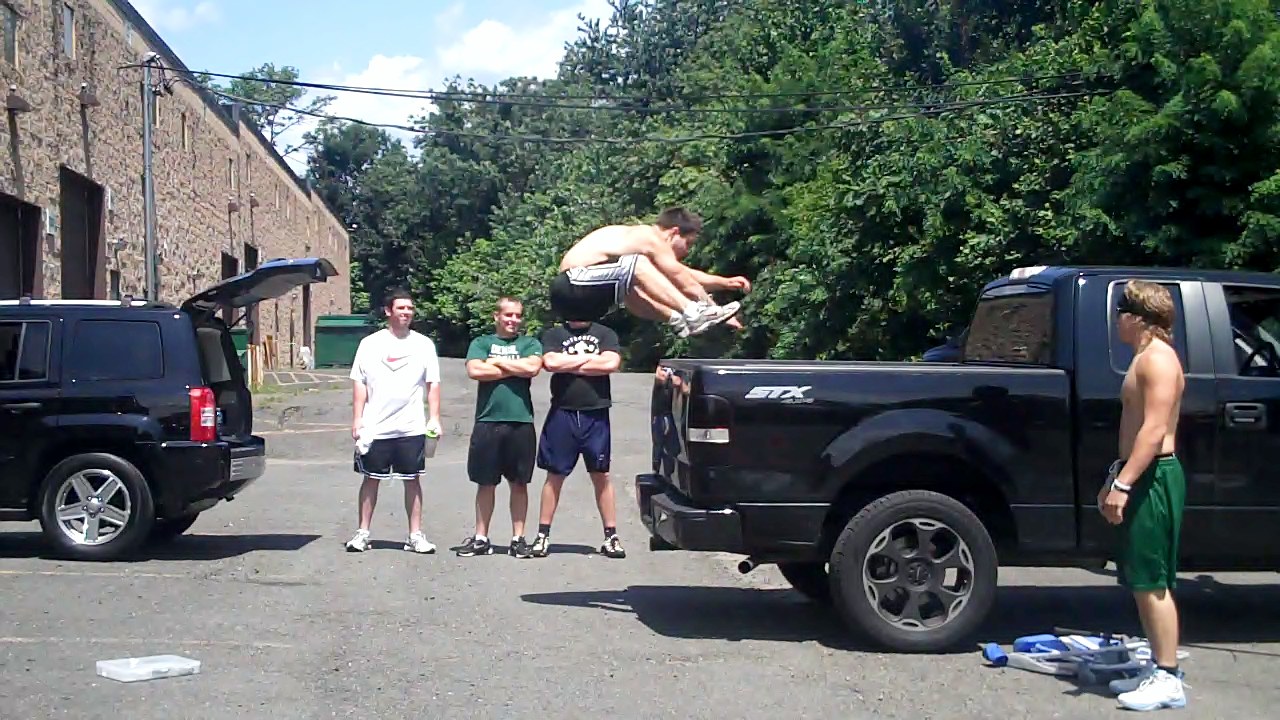 Cameron Josse jumped vertically into the back of a pick-up truck!

What more can I say about this??? I guess Strongman Training doesn’t create “big & slow” athletes afterall, huh? This is the ultimate display of strength, power, mobility and coordination. Not too many athletes walking this earth can perform this feat! I guess something’s working. Enough said. 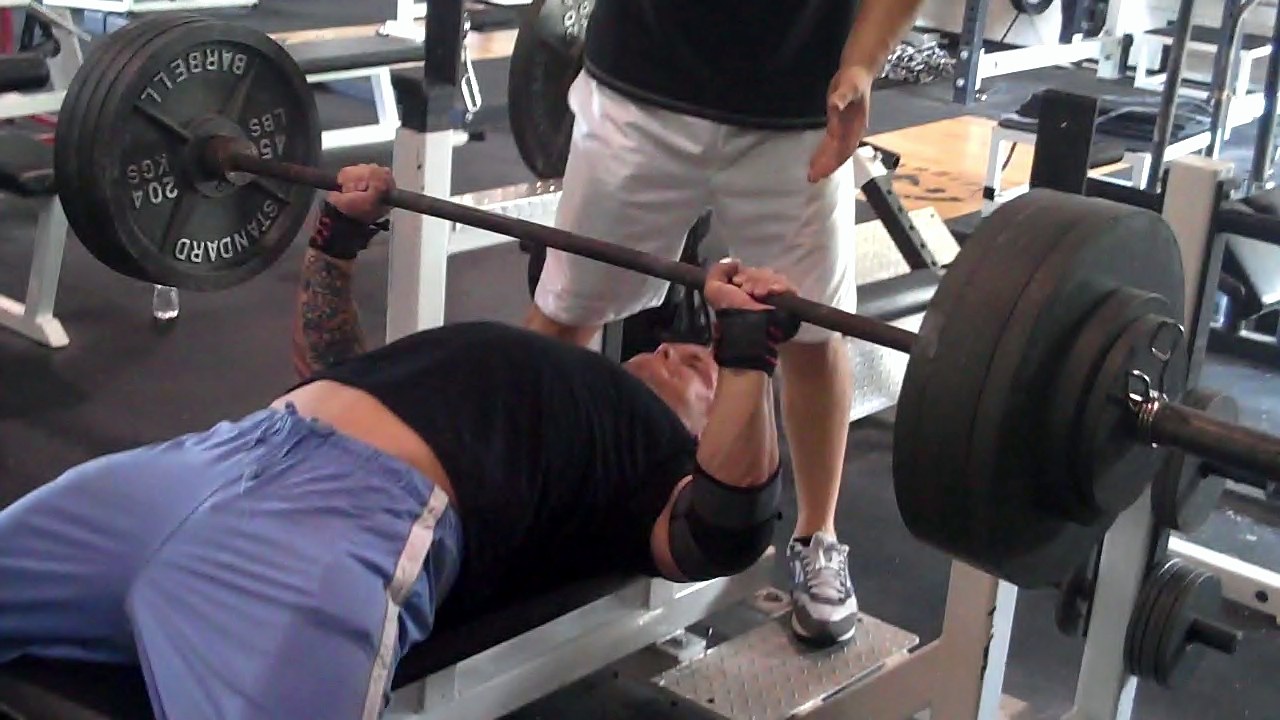 New Jersey State Trooper, Brian Markowski, proved that he has some “traditional” strength to go along with his “Strongman” strength! The above picture shows Brian breaking our Bench Press Record in the Washed-Up Meathead Division with this 475-pound press! 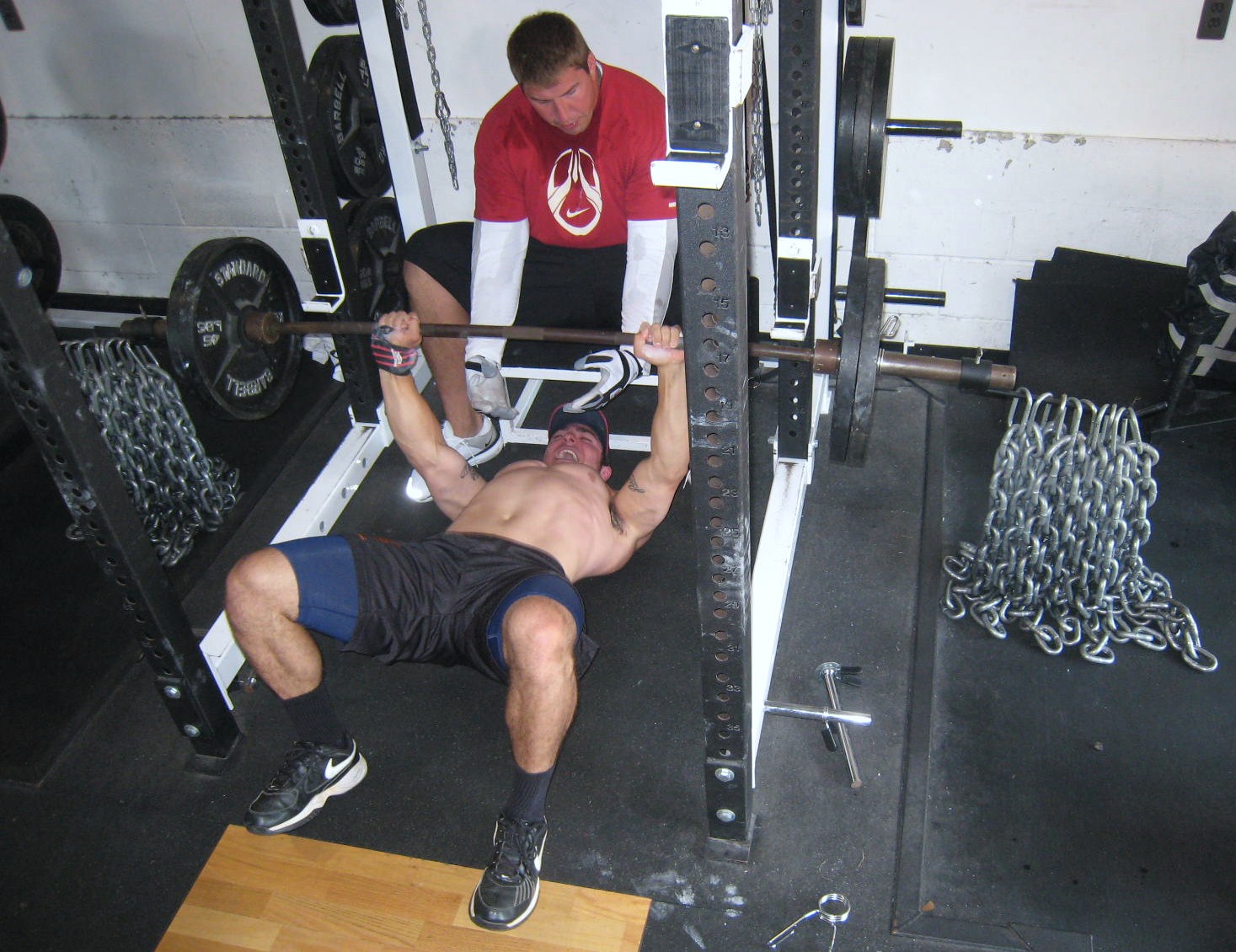 EliteFTS continues their tradition of coming up with equipment that helps athletes become brutally strong! Their latest “invention” is the CHAIN MATE. These things make floor pressing and deadlifting with chains much more productive and practical! Do you “need” these? The answer is ‘No‘. But, every summer I like to invest in 1 or 2 new “toys” that add variety into our program and keep our athletes motivated! (I suggest every coach/gym owner does this!) These things fit the bill!

After a dedicated year of training, Pat did THIS last week on his 16th Birthday…

What a difference a year has made for this young Track & Field standout! He’s already throwing over 53′ in the shotput and he’s got two more years of high school!! Remember his name…he’s just getting started! 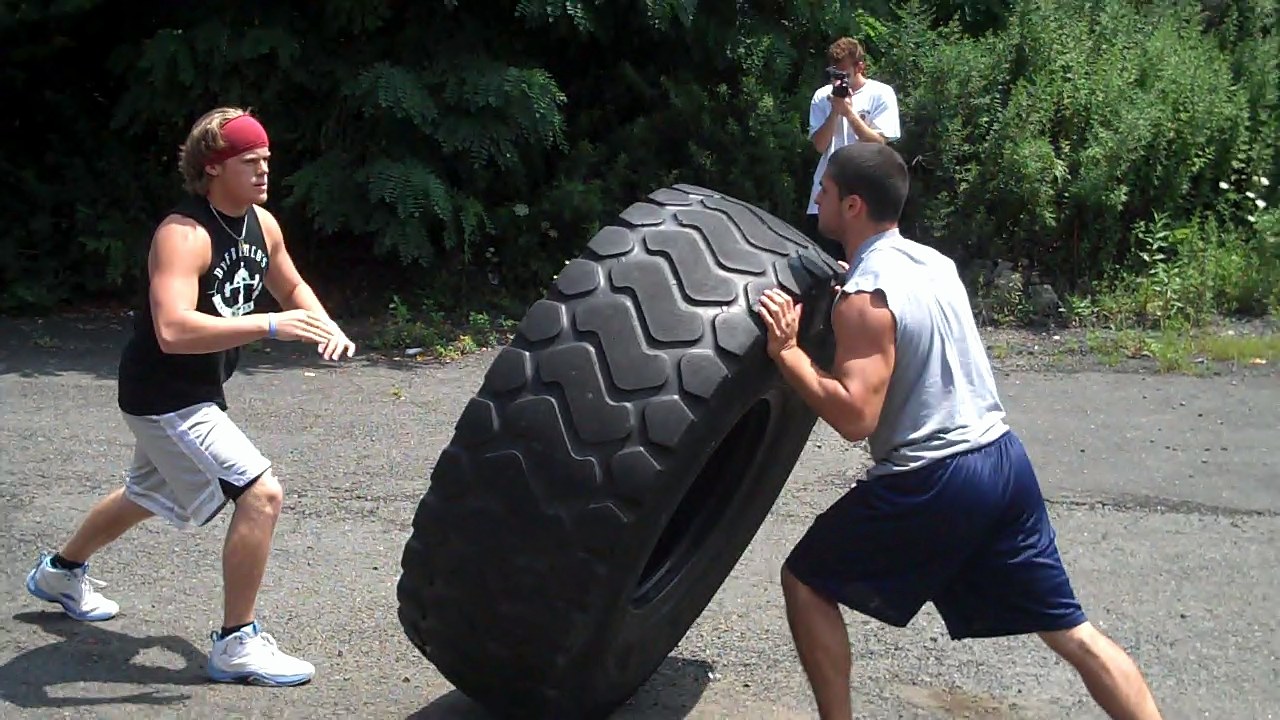 University of Rhode Island WR, Zack Moore (left), does battle with the county’s leading rusher, AJ Scoppa. (AJ is heading to East Stroudsburg to play running back…check out his highlight film from his sophomore year HERE!)

As training camp approaches for our football players, we try and incorporate more “specific” exercises that bridge the gap between weight room strength and football strength. The most popular Dynamic-Effort upper body exercise most coaches incorporate are medicine ball throws. Medicine ball throws are great because they enable the athlete to “release” the object, which helps develop power because they don’t have to “decelerate” at the end of the movement (like most barbell & dumbell exercises). Although I like medicine ball throws, they can’t compare to “Tire Battles” for developing upper body power! After all, why throw a 10lb. med ball when you can throw a 400lb. tire?!

I used to make my athletes perform tire battles by keeping their hands on the tire the entire time, while trying to “push” each other over. But over the past couple weeks, we have been “releasing & catching” the tire and I like it MUCH better! I’ve been having my guys do this as the main exercise on Dynamic-Effort Upper Body Day. You can perform a set amount of reps or perform timed sets. And this exercise isn’t just for football players! It can be used with any athlete that needs to improve their throwing power, punching power, or just overall upper body power!

Check out the video below of two college football lineman doing battle! This video will really give you a feel for the type of upper body force that’s developed with this drill!

As an added benefit, get ready for a SICK pump in your chest, tris, shoulders and upper back when performing tire battles! “The Russian Bear” actually had a vein pop out after his 3rd set…and according to him, “his body doesn’t have veins” LOL!

Joe D. goes back to his “roots” 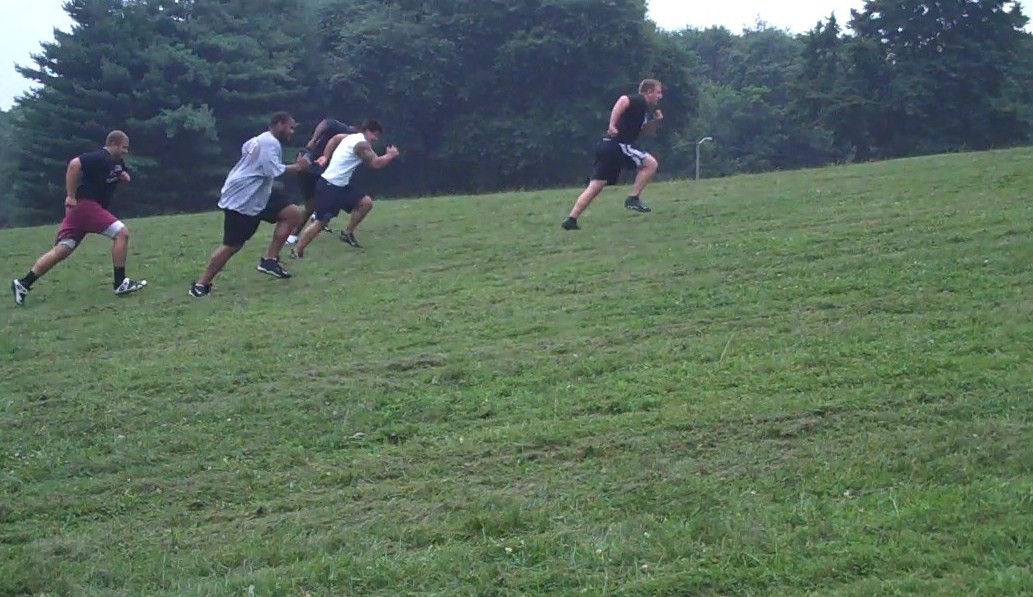 There is nothing new about running hills. But, I’m embarrassed to admit that I kind of “forgot” about this old-school training method amongst all the new things we have incorporated at my facility over the years. I say that I’m “embarrassed” because hill sprints were THE first training method that my father introduced me to back in 1989…and they are THE thing I actually felt transfer to the football field the most. The lower body power, knee drive, speed and endurance it gave me literally helped me run through people on the football field.

Ironically, my gym is only two minutes from the house I grew up in…and only two minutes from the exact hill that I ran back in the day.  I want to kick myself for not incorporating “The Hill” into my program more often. I don’t know how the hell I could have forgotten about “The Hill”; my dad used to drive me there, make me wear 10lb. ankle weights and then yell at me while I sprinted like my life depended on it…“C’mon, it’s the 4th Quarter and the game is on the line…you gonna quit or run through people!!!” — these are the things my dad used to yell as I ran the hill…and it worked! Although I HATED running that thing, it gave me a HUGE advantage over my competition. When my dad was working, my mom would drive me to “The Hill”. The difference was that she would just sit in the car, rosary beads in hand, and pray I didn’t work myself to death 🙂

Sorry for that trip down memory lane, but it’s kind of cool when – 20 years later – my “job” enables me to go back to “my roots” and do for athletes what was once done for me. In 1989, if you would have told me that I would be training NFL players on that same hill in 20 years, I would have called you crazy. Life is funny. 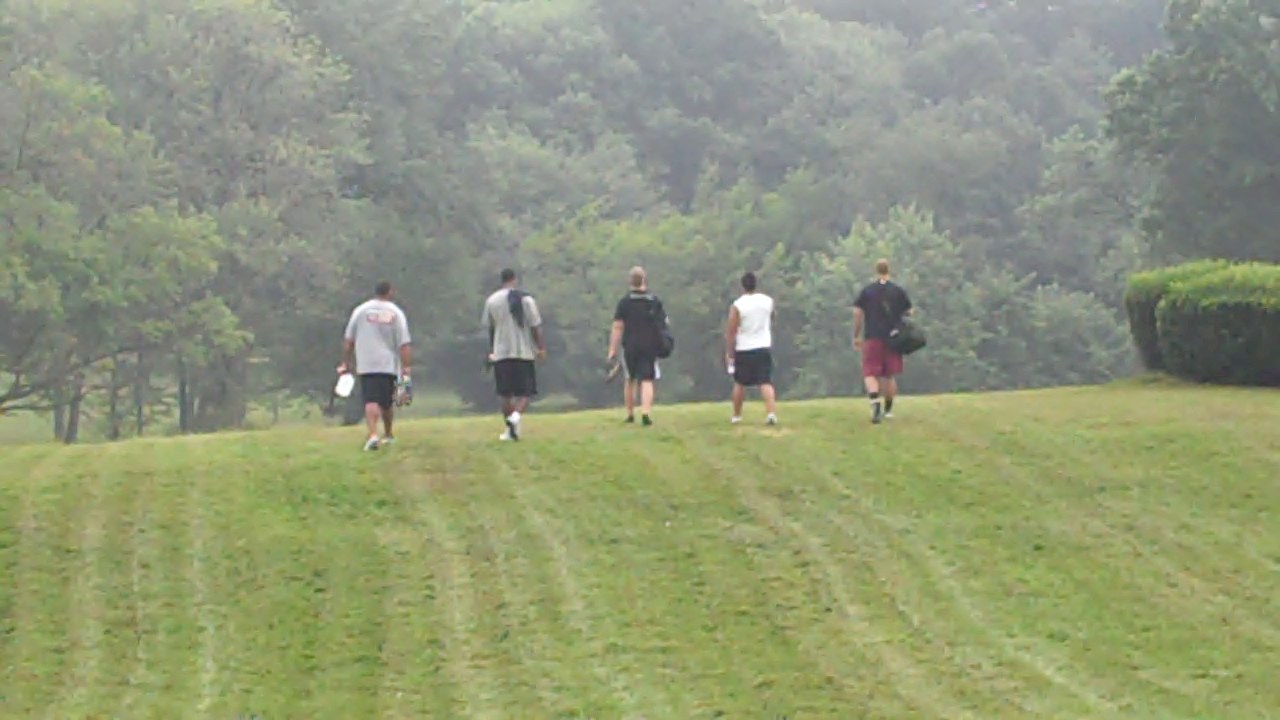 So there you have it…your quick summer recap from the Dirty Jerz. To summarize…

*They jump onto and over high things…

…and they will all be KICKING ASS this season!!!

Hard work trumps fancy training methods every time! I want to know what YOU think? Leave me your comments below!