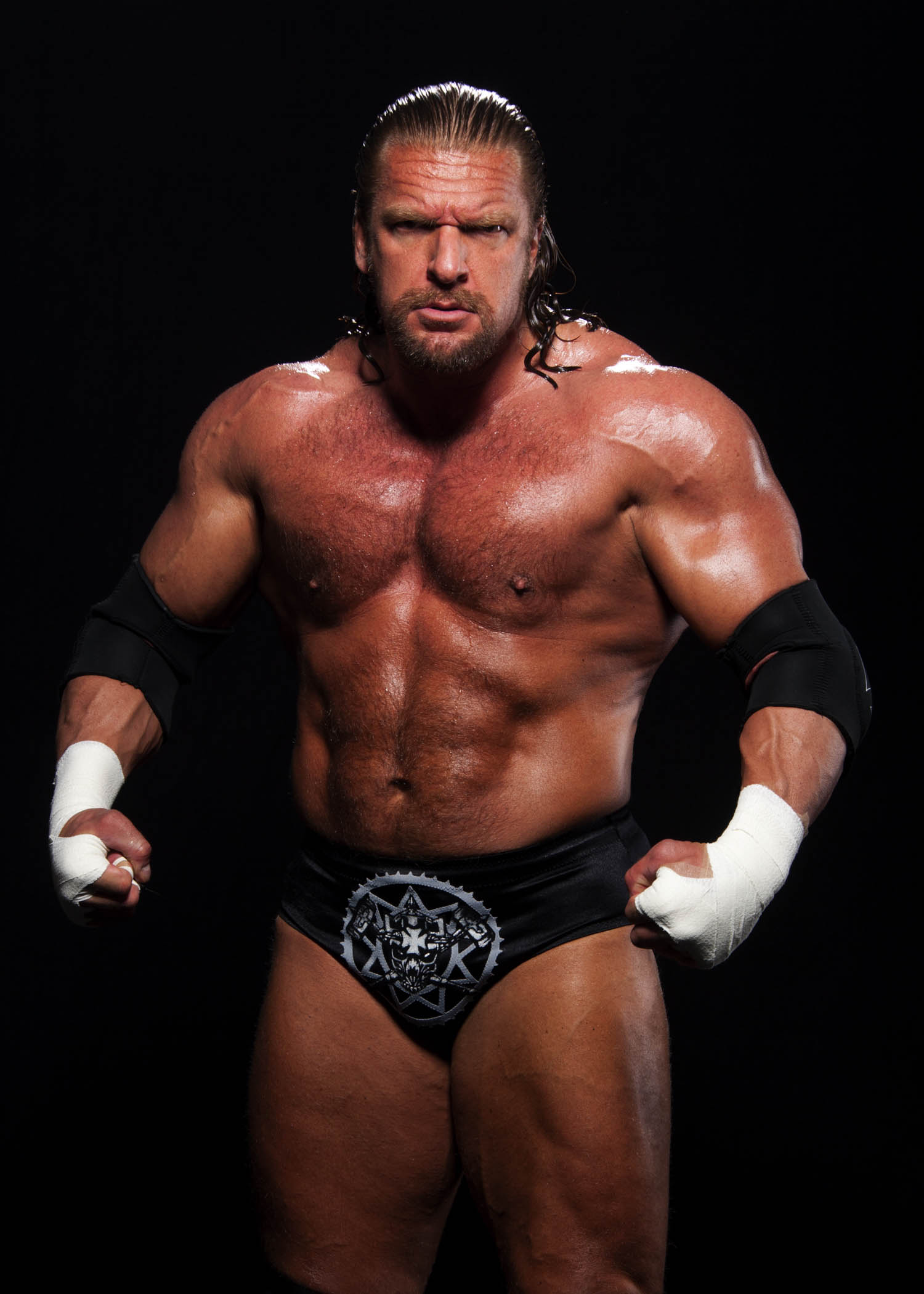 ~Two years ago, I was training a group of NFL & college football players when I received a message to call back a man by the name of Paul Levesque. “I couldn’t really hear the message because it’s so damn loud in here; but I think he’s supposed to be a WWE wrestler or something”, Ashley explained to me.

“Just put his number by my gym bag and I’ll call him back if I have time tomorrow…I doubt the guy is actually in the WWE”, I replied.

Then, one of my college athletes interrupted the conversation…“WAIT! What did you say his name was?! Did you say Paul Levesque? If so, that’s Triple H! Go call him back right now! We can finish the workout on our own!”

The rest, as they say, is history…

Nothing “fake” about it…

One of the main reasons that Triple H contacted me was because he knew he needed to make a change in his training. He had just turned 40  and the injuries he sustained during the course of his legendary career were really starting to take their toll on his body.

There is a very interesting dilemma that most WWE superstars face: It’s very important for them to have “the look” — but if they sacrifice “function” just to look good — their bodies become a ticking time bomb and injury is inevitable.

Many people reading this may be saying, “Why do these guys have to worry about training for ‘function’ and preventing injury; isn’t wrestling fake?” After working with Triple H for almost two years now, I can tell you with confidence that the physical demands and injuries that WWE superstars deal with are as real as it gets! I’ve been training professional athletes for over 15 years and I can guarantee you that I’ve never come across an athlete whose body has been through more abuse than Triple H.

Here’s just a “few” of the injuries Triple H has sustained in the ring: 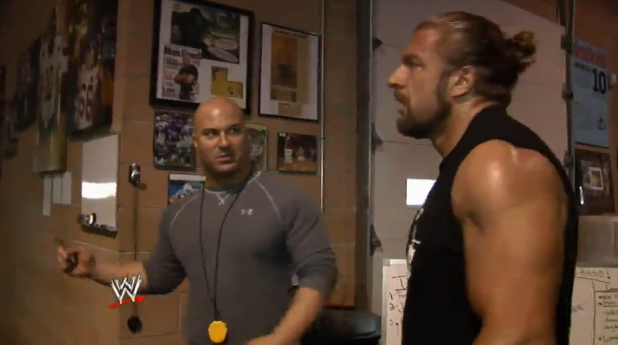 “I can say, from an athlete’s standpoint, I wish I would have met Joe 20 years ago.”
-Triple H
(When asked about injuries suffered early in his career and what he wished he had done differently…)
—–
I can tell you first-hand that the surgeries and scars on Triple H’s body are real. The travel schedule, physical demands in the ring, and the fact that there’s no off-season in the WWE, make it imperative for WWE superstars to take care of their bodies and train for function.

After my initial meeting with Triple H, I had a new-found respect for the “Sports Entertainment” business. These guys are basically a combination of football players, Hollywood stunt men, gymnasts and bodybuilders all rolled into one! I was very excited to take on this challenge and help Triple H go from “injured bodybuilder” to “healthy athlete” — all while enhancing “the look” he’s become famous for!

Note: It would be impossible for me to cover every single aspect of Triple H’s training during the past two years…nor am I willing to give away all that information anyway 🙂 So I decided to provide some bullet-points of the most important changes I made to his former training style. According to Triple H, the changes listed below have had the biggest impact on his strength, health, performance and appearance during the last two years.

Example: When I first started training Triple H, his “newest” injury was the surgically repaired biceps tendon of his left shoulder. I spent the first three months of training focussing on his external rotators, rear delts, mid-traps, rhomboids, etc. I don’t think I had him touch a weight when training his ‘upper back’ during the first three months we trained together. I had him doing tons of strict isometric holds, bodyweight exercises and band resistance to target these muscles. I knew if I could strengthen these often-overlooked muscles, Triple H would eventually be much more likely to throw a punch, execute a body slam – as well as lift heavy weights again – with much less chance of an inhibitory response from the Golgi Tendon Organ. (Simply put, when your smaller, stabilizer muscles are not strong/stable enough to support a heavy weight or stabilize during a difficult activity; your Golgi Tendon Organ will “shut off” your bigger (prime mover) muscles in order to prevent injury to the weak link(s) in the chain. This is called the “tension effect“). Reducing the likelihood of this inhibitory response (by strengthening the ‘weak links’) drastically reduces Triple H’s potential for future injuries, while increasing his performance. Much to Triple H’s surprise, these “less sexy” exercises (“Y-Handcuffs”, Band Face Pull+External Rotation, Band Pull-aparts, etc.) actually made his upper back/rear delts more muscular than when he was performing traditional bodybuilding movements! We basically “filled in the holes” of his upper back by getting the smaller, “deeper” muscles to hypertrophy. These “rehab-type” movements ended up giving Triple H what bodybuilders refer to as a “three-dimensional” look (due to the thickness/density that was built.) And when we finally started incorporating heavy rows and other compound movements into his program, he was able to handle heavier weights due to the “structural balance” that was created. 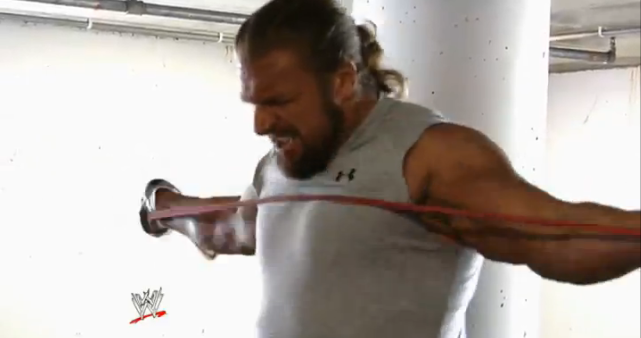 Triple H has performed over 30,000 band pull-aparts during the past 2 years. 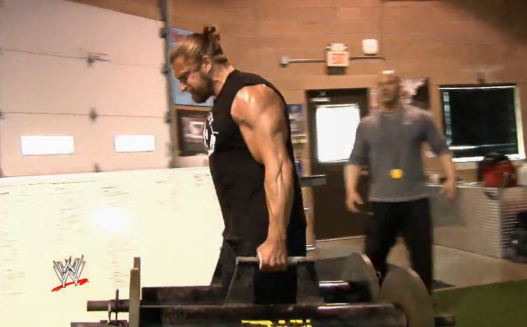 Farmers Walks are one of THE best exercises an athlete can do to improve overall body strength (especially in the hands/forearms, core and feet/ankles)

-Barefoot training. The very first day I met Triple H and he told me about his quad tears, knee pain, torn hip muscles and multiple ankle sprains; I immediately recommended he start training in Vibram FiveFingers. (These are specially designed “shoes” that are essentially the same as being barefoot.)

The human foot has over 100 muscles and tendons that run through it. Wearing cushioned sneakers is like wearing a cast all day, so the muscles and tendons in your feet become weaker over time. This increases your chances of ankle, knee, hip and low back injury — or in Triple H’s case — a poor sneaker choice will prevent old injuries from healing properly. Training in Vibrams has essentially “uncasted” his feet and helped restore strength, balance and range of motion in his joints. As an added benefit, he added some size to his calves as well!

-No more lifting straps. Lifting straps act as a “cast” to your hands and forearms (similar to the example of cushioned sneakers and your feet.) Straps may help you ‘lift more weight’ while you’re in the gym, but then your grip won’t be up to the task during ‘real-world’ activities or on the athletic field.

Taking it a step further, I regularly have Triple H perform exercises with thick-handled dumbells and barbells. The larger diameter of thick barbells and dumbells increases motor unit recruitment, which accelerates strength & hypertrophy gains. On average, I’ve noticed about a 10% increase in Triple H’s strength once we resume training with regular-diameter barbells and dumbells.

-Your core is your new weightlifting belt. Triple H has not worn a weightlifting belt since we started training. I’m not opposed to the use of belts during max-effort sets of squats and deadlifts, but most people wear them way too much. This is a huge mistake; it’s also one of the reasons so many gym rats can display their strength while in the gym, yet they are worthless when it comes to real-life activities outside of the gym (such as moving a couch). This is because they don’t have the core strength to “transfer” the strength of their limbs! The most functional way to strengthen your core is to learn how to brace when lifting without a belt. This will do more for your “abdominal strength” than all the crunches in the world! 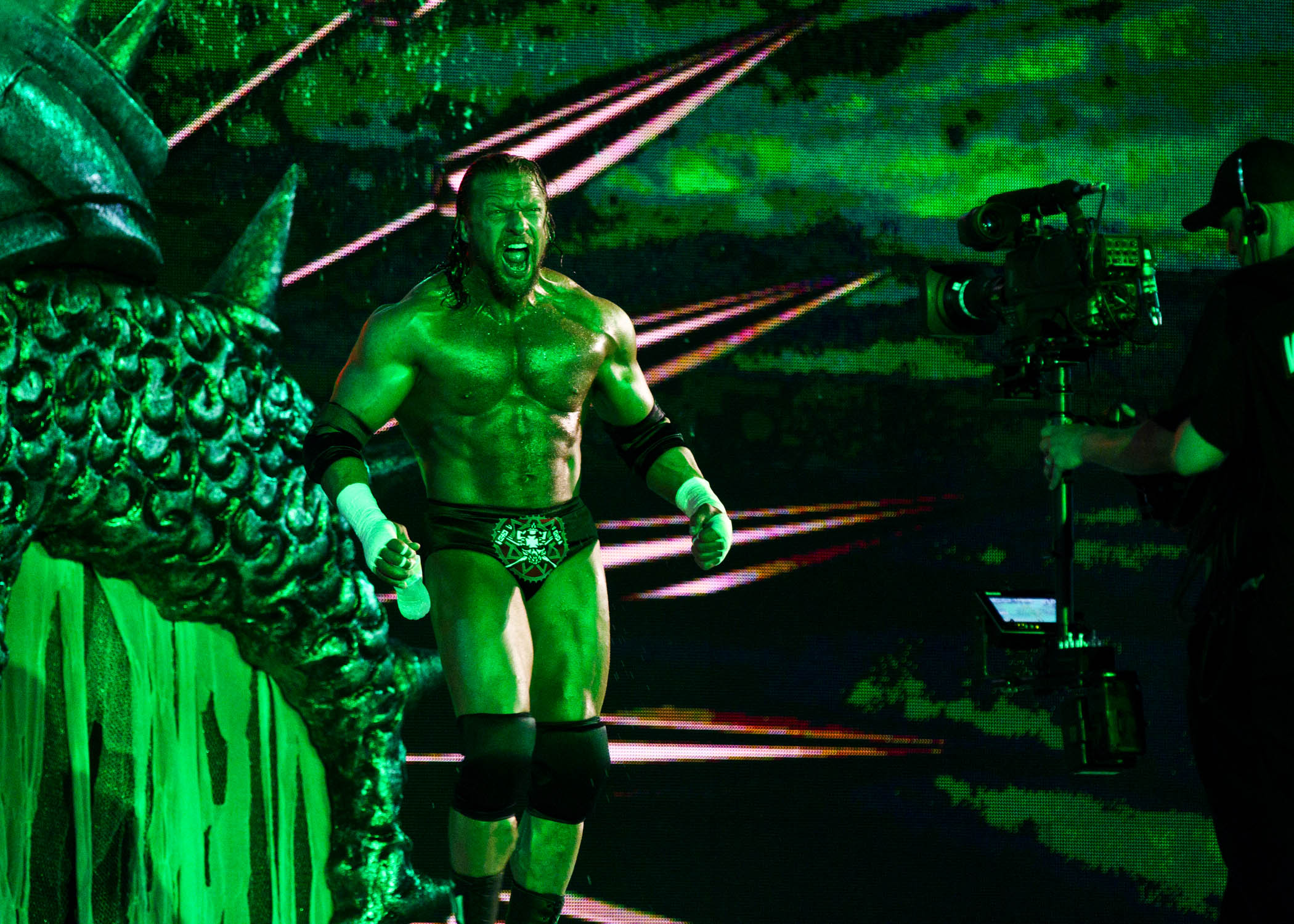 In PART 2 of “Changing THE GAME”, I will reveal exactly how Triple H trained during his final week of preparation for Wrestlemania 28! You don’t want to miss this day-by-day, behind-the-scenes look at how a WWE legend prepared his body for one of the most physically demanding matches of his life!

P.S. – Drop me a comment below and let me know what you thought of Part 1 of this exclusive article series!